It’s Derby Day Saturday, Kentucky’s National Holiday, which involves many ponies and enough mint juleps to drive you to drink. Want a recipe? You could look it up, as Casey Stengel used to say. The April 2010 post Talk Derby to Me has recipes given to me by some distilling luminaries: Chris Morris of Woodford Reserve; Booker Noe, Jim Beam’s grandson; Jimmy Russell of Wild Turkey; Kevin Smith of Maker’s Mark and their legendary like. [Fred Noe, Booker’s son, possibly aware of the huge brogans he must fill, provided two, one based on Beam and another on Knob Creek.] They’ll keep you adequately lubricated for the whole weekend. 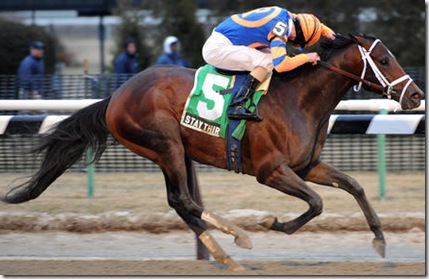 My personal Derby pick is Stay Thirsty [above, with Ramon Dominguez up], whose cheerful name recalls not only my devoted Thirsty Reader but Dos Equis beer’s Most Interesting Man in the World TV and radio commercials, memorably taglined ‘Stay thirsty, my friends.’ The MIMW’s sophistication, worldliness and craggy good looks blend Marlboro Man, Fidel Castro, Ernest Hemingway and Ricardo Montalban [in his Rich Corinthian Leather Period]; finding a face for that was a tall order*. That plus the patended deadpan narration of Will Lyman and good copywriting makes ads that are funny, witty and imaginative; unlike, for example, most wine commercials. So funny and witty they inspire the same from viewers: quite an accomplishment, considering that as a rule YouTubers’ comments are usually moronic when not worse.

Of the 15 spots in the series so far my favorite opens deceptively with an idyll in the Italian countryside but goes wild very quickly. Most can be seen online: start with Google and YouTube, then check out www.facebook.com/dosequis; it has more spots, plus details of the upcoming ‘League of the Most Interesting’ contest. Unfortunately, the contest doesn’t involve overhand bowling or being thrown out of an airplane in a kayak [perhaps due to some PR-side fretting over ‘liability’].

My backup is Pants On Fire [Rosie Napravnik in irons], again for the name. Both names, in fact. Just imagine the track announcer excitedly shouting ‘Napravnik’s taking Pants On Fire to the rail!’? Not quite the same if it’s Mucho Macho Man, say, or Archarcharch? To say nothing of Comma to the Top, a horse unreliably reported to be owned by a renegade international copy-editing cartel.

When last in Louisville [say Looville, never Loo-ey-ville] I was not on the rail or in the infield or at the clubhouse turn but was immersed in whiskey and baseball at two of the city’s finest wood-working institutions. One is the Louisville Slugger Museum and Factory, which got a magnificent makeover, renovation and general glorification in 2009. You know the drill: immerse thyself in the National Pastime; see trees become bats; soak up the wisdom of Ruth, Aaron, Williams and other great hitters; and learn about women and minorities in the game. Then play with the many interactive displays and achieve photo immortality while clutching an immortal’s bat. That’s me [below] with the Model B220 warclub of the great No. 7**]. It’s the real thing, hence the white cotton gloves. 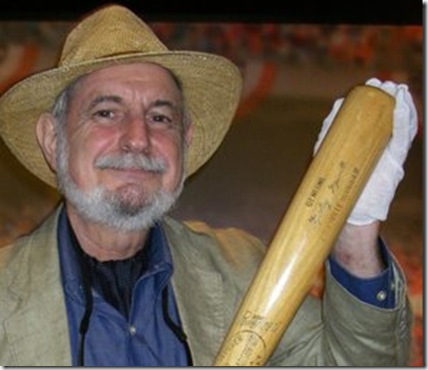 Then came the Brown-Forman Cooperage [née Blue Grass] which makes 1500 barrels a day for Woodford Reserve, Old Forester, Jack Daniel’s, Early Times, Canadian Mist, El Jimador and Herradura. Among spirits companies only B-F has its own cooperage, and despite the addition of modern equipment and constant updating, the plant still has a 1940s look and feel—and smell: the air is rich with the aroma of furnace-charred American white oak. 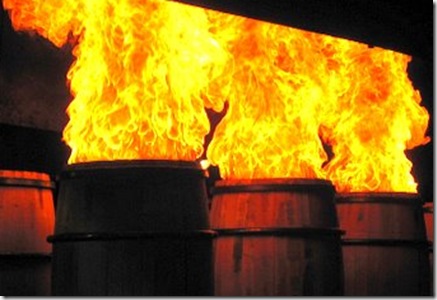 Chris Morris, B-F’s master distiller, guided me safely through and warned me about the perils of the barrel railway, while saying the aromas are his favorite part. Mine was the hand-work. The hand tools of the cooper’s mystery—the sun plane and the croze, the long joiner [a plane about 6 feet long], the bung auger, the chince or chincing iron [‘used for driving the flag into the groove’] and such—were vanished even by the time the plant opened in 1945. Even so, barrels are still raised by hand [N.B.: not made, assembled, built, erected or slung together; the term of art is raised]. An expert can raise a couple of hundred per shift, and there are hushed whispers of veritable Stave Gods known to have raised 350 and even more. The cooperage has since opened to the public; it’s a treat for kids and factory-tour fans who delight in seeing raw material become parts become products, also for fossils like your correspondent, who is so old he can remember a time when American workers actually made things. See www.mintjuleptours.com or call 502 583-1433 and seek ye the peerless Joanie. And just watch your step anywhere near the barrel railway. 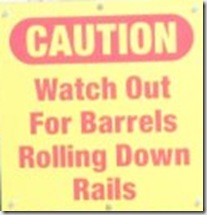 This is no drill, as they said at Pearl Harbor. Barrels come down the rails without warning, swiftly and silently; they weigh more than 100 pounds apiece and will flatten anything and anyone that gets in their way.

It’s thirsty work watching so much barrel-raising, and it called for a drink or few, which Chris elected to lay on at the Woodford Reserve Distillery, down the road a piece near Versailles, which you’ll want to pronounce Ver-sales. You don’t want anyone thinking you’re French. The building, a handsome limestone structure dating to 1838 and added to on several occasions since, sits serenely in a bosky dell beside Glenn’s Creek. 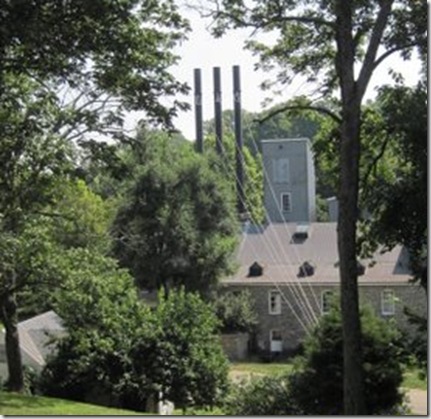 The setting inspires romantics to dream of colorful artisan moonshiners, but Chuck Cowdery, author of the superb Bourbon, Straight: The Uncut and Unfiltered Story of American Whiskey, has said that modern ‘shiners, who merely cook bulk sugar into crude booze, deserve not folkloric halos but sojourns in the Waddy-Petrona Correctional Facility and Dental School. Max Watman, whose delightful Chasing the White Dog : An Amateur Outlaw’s Adventures in Moonshine, would no doubt agree.

Brown-Forman has restored the distillery to a thing of rural-industrial beauty, and visitors are welcome to stop in and see Woodford Reserve being made. It’s awful-looking, awful-smelling stuff you see pumped into the big wooden fermenters, but then chemistry takes over the ancient practices of pot distillation 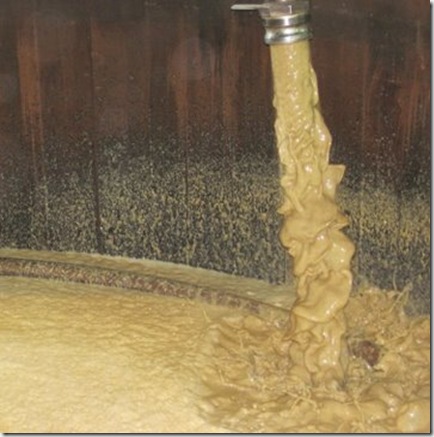 and oak-aging work their miracles, first in the three big Scotch-built copper stills, then in the barrels stacked for six or seven years in the rickhouse.

Tours of varying length are but $5 and $10 [call 859 879 1812] and there are spaces available to rent for festive events, but weddings and wedding receptions are excluded, most likely for reasons of self-defense. Wedding-rehearsal dinners? They’re another story because they’re reliably less boisterous events [859 879 1934]. Whatever the reason for your visit it will be the part of wisdom to call the tour office first, for precise directions are required. The taped message warns that ‘due to our distinct location’ [i.e., the 19th Century], ‘using GPS is not advisable.’

The distillery is a landmark partly for its beauty [it’s considerable; this is Thoroughbred country, after all] but mainly for its importance in bourbon history. It was here under Oscar Pepper [son of the distillery’s founder, Elijah] that Edinburgh-born Dr. James C. Crow pretty much created modern bourbon by innovation and experiment. He created the sour-mash process and maintained rigorous cleanliness in thesearch for product consistency, and he was the first, so far as is known, to sell exclusively whiskey that had been aged in new charred oak barrels. Before the Good Doctor made bourbon, most of what Kentucky made was mere whiskey, and often very mere whiskey at that.

Our farewell drinks that afternoon came from a barrel in the rickhouse: Chris tapped it with an electric drill and I came thirstily to the rescue when the bit jammed in the dense wood. All those hours of This Old House turned out to be useful after all. Imagine that. 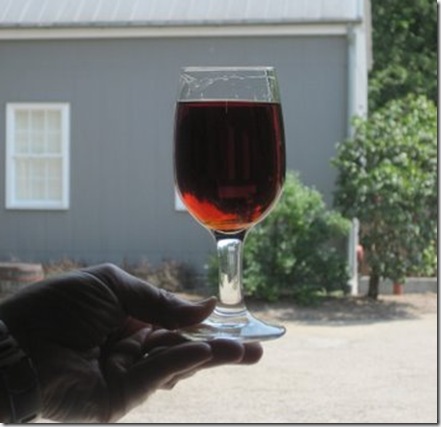 *well filled by the actor Jonathan Goldsmith. You were expecting maybe Ludwig Stössel?

**Mickey Mantle. You had to ask?

The distillery became a National Historic Landmark in 2000. Dr. Crow did indeed practice medicine, and he gave his services, according to Chuck Cowdery, ‘mostly without charge.’ Cowdery adds that he ‘was fond of reciting the poems of Robert Burns’ and that after his death his name became part of one of America’s first brands, Old Crow. Once famous, it is now no more than a bottom-shelf ‘value brand.’