In an uncharacteristic move, the wine world unbuttoned itself a bit recently. Said world is normally populated by a surfeit of folk in $100 watered-silk Italian neckties who do not speak so much as intone celestial sentiments like ‘Great wine is made in the 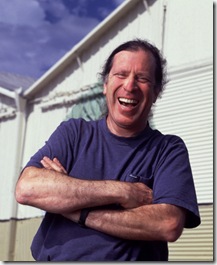 vineyard’ moments before treating their juice to industrial yeasts, multiple fermentations and 100% or even 200% new French oak. Nevertheless, the wine world relaxed long enough to induct Bonny Doon founder and President-for-Life Randall Grahm (that’s him at right, guffawing maniacally) into the Vintners Hall Of Fame.

The official excuse, per the Culinary Institute of America, was ‘significant contributions to the wine industry.’ Chiefest among them should be his relentless, highly literate wit and humor; his outrageous puns and eternal unstuffiness. Not one to settle for cheap wisecracks or desperate puns (e.g. Goats do Roam), Grahm in his nooseletter and elsewhere would produce chapter-length hilarities inspired by literature classic (e.g. The Vinferno) and contemporary (A Perfect Day for Barberafish).

Much of the nooseletter’s unruly genius is preserved in Grahm’s Been Doon So Long: A Randall Grahm Vinthology (University of California Press, $35). It’s full of wit and wickedness (“The Heartbreak of Wine Geekdom; Ten Ways to Know You’ve Met a Real Wine Geek”is one of my favorites); it also has subtle notes of tobacco and Gravenstein apples, and an abundance of long-chain tannins. It ‘pairs well’ (ick!) with Le Cigare Volant or any other of Grahm’s Rhone-variety wines. Or his Ca’ del Solo Sangiovese or Dolcetto or, come 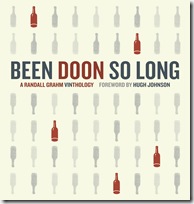 to think of it, anything else he makes. Grahm was shall we say somewhat sobered by the event, saying ‘I am of course tremendously proud and gratified by this honor.  But in candor, this really does mean that I have to at last buckle down and get to work.’ The mood passed, though, as he quickly added ‘Work?  Work!! (to paraphrase Maynard G. Krebs).’

Fellow inductees included Andy Beckstoffer, Zelma Long and (posthumously) Al Brounstein and Leon D. Adams, wine historian and author of The Wines of America. Not inducted: Barrique Obama, the failed herald of “change,” fell two votes shy because his Chardonnays are still so woody they could be used to kill vampires. Fellow hopeful Puncheon Judy fared worse. The producer of Motley Cru (‘made from any grapes from anywhere’) had offended the Academy before, as did the wine’s alias (One-Buck Chuck) and the exclusive marketing deal with Interstate rest stops. Insiders hint, however, that her late-night cable-TV ads, complete with an 800 number an ‘act now and we’ll double the offer’ come-on, were at last too much for the judges, who responded with a lifetime ban.