Paso Robles, which lies about halfway between LA and San Francisco, may be famous for its RhÃ´ne Rangers, but many Pasos (as the locals style themselves) wouldn’t have you overlook their Zinfandels. To that end they are holding a festivalâ€”winery events, tastings, auction, hoopla and folderolâ€”March 18-20. (There might even be lollygagging, for all I know, and shilly-shallying, too, for the Pasos are a reckless crowd.) Anyway, I am partial to Zinfandel in all its infinite variety, including Italyâ€™s Primitivo and Croatiaâ€™s Crljenak KaÅ¡telanski, for many reasons. Right now itâ€™s because the Pasos have produced a truly witty television ad for their festival.

And because Iâ€™m not going to be geographically constrained, Iâ€™ll add that further zing is provided by Joel Peterson of Sonomaâ€™s Ravenswood. Peterson, founder and president of same, originator of the battle cry â€œNo more wimpy wines!â€ was elected in November  to the CIAâ€™s Vintners Hall of Fame, which he entered treading upon the prostrate bodies of those who cling to the pernicious belief that wine belongs on a pedestal instead of on the table. Anyway, click on the arrow below to see Pasoâ€™s nifty commercial.


Weâ€™re required by statute to quibble a bit here: An alpine peasant playing a Neapolitan tarantella on a Sicilian accordion in Tuscany has nothing to do, in whole or in part, with Primitivo, which is the wine of Puglia. Itâ€™s probable that the spotâ€™s producers were guided by the fact that many Americans think Tuscany is Italy and have never heard of Puglia. Never mind; thatâ€™s wine on the screen, and itâ€™s looking good.

A few years ago, Galloâ€™s Turning Leaf put a pretty fair TV spot on the air: it showed, as I recall, a handful of attractive twenty-somethings at a cookout, and as the Turning Leaf was poured they declared themselves officially off duty for the weekend by tossing their cellphones into the lake. 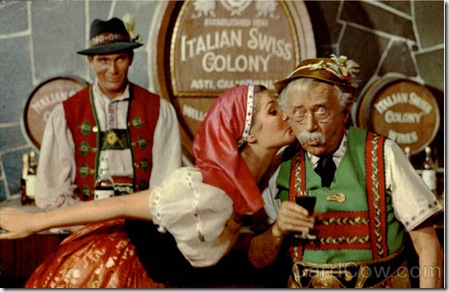 actors to  play the part (if you can remember their names thereâ€™s probably something wrong with you; if not, see the answer below). Millions of Ameri-cans whoâ€™d never heard of Soave until Bolla began advertising it relentlessly came to believe that Soave Bolla was the name of the wine, so when they wanted a bottle of Soave they reflexively asked for Soave Bolla. That  certainly didnâ€™t hurt Bollaâ€™s sales.

Things improved in the â€˜70s, when Paul Masson hired Orson Welles to intone â€œWe will sell no wine . . . before its timeâ€ (today the role would likely go to James Earl Jones or Morgan Freeman). Welles was a mighty figure and he looked it; he brought class to the commercials and to wine itself, which was treated seriously, but not stuffily. He needed money at the time, and so also made commercials for Carlsberg beer; G&G, a Japanese whiskey; and frozen peas. Itâ€™s worth taking a minute to go to YouTube and enter orson welles paul masson. Youâ€™ll find an assortment of his Paul Masson commer-cials and as a chaser a couple of superb outtakes. In one he stops a shoot to re-direct and script-doctor the commercial for frozen peas; another is titled Orson Welles Drunk Outtakes for Paul Masson Wine Commercial (for that one you should be a] sitting down and b] well aware of your surroundings, be-cause LOL and ROFL are likely to prove gross understatements. Like, not in church is what Iâ€™m saying.) Another reel, titled More Drunk Orson Welles Outtakes, is briefly funny, but a spoof.)

Ohâ€”the Little Old Winemaker. He was played by Ludwig StÃ¶ssel, who was the face, and Jim Backus, who was the voice.