As the Manhattan is the Cary Grant of cocktails, so is the martini (the real thing–ginful, sinful and vodka-free) is the Fred Astaire. One is more suave than elegant, the other more elegant than suave, the twain indispensable to civilized life. Eric Felten, James Beard Award-winner and columnist for the Wall Street Journal, says in Howâ€™s Your Drink? (a Napoleonic book: short but powerful) the Manhattan is father to the Martini; merely â€˜substituting gin for the whiskeyâ€™ did the trick. In time dry gin replaced the sweet Old Tom gin of the 1880s, there was no going back.

Not so with the Manhattan, Thirsty Reader. Carpano Antica Formula red vermouth provides a good excuse to go back–to the 1780s, when Antonio Benedetto Carpano formulated it in Turin. Spicier, livelier, more muscular than modern vermouths, Antica is a rewarding Italian immigrant. At $30 a liter, it doesnâ€™t travel steerage. (In fact it travels in a decorative tin thatâ€™s great for pasta stowage.) Tasting was in order.

So a measure of Antica Formula was followed by twice as much whiskey, three dashes of Angostura and much stirring over much ice. No shaking! Unless the cocktail is clouded with fruit juice, egg or dairy in the mix, shaking could bruise the booze. Such is the wisdom Bruce has absorbed at the elbow (or knee or   other joint) of King Cocktail himself, Dale DeGroff. Our stemware included two rarities from the Ramsay Archive: Bruceâ€™s Top Hat (by Morgantown Glass), rescued from Manhattanâ€™s long-gone Hotel Knickerbocker, and a prissy little saucer-type etched with the official seal of Saskatchewan, one of many sold when the provincial government suffered an attack of abstinence. 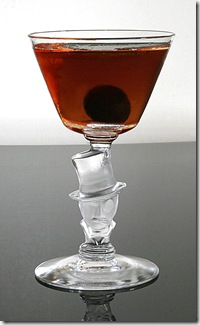 The Antica made excellent Manhattans, brisk and spicy. We liked the Rittenhouse model best, and the extra alcohol didnâ€™t take over; the Old Overholt was  persuasive, too. The Woodford, we thought, tended to mask the Antica with bourbonâ€™s sweetness. It made a gentler, rounder drink perhaps more to current taste. (Indeed, bourbon is very common in todayâ€™s Manhattans, and some bartendersâ€™ guides say merely â€˜whiskeyâ€™ or â€˜blended whiskey.â€™)

Red vermouth won many of its fans in the 1950s and 1960s–the Sunny Italy era of tourism, when Americans learned the delights of sipping on balconies under the Roman sun instead of being busy all the time. The big brands were Martini & Rossi (â€˜No Martiniâ€”No Partyâ€™), Campari and, perhaps biggest of all, Cinzano, which so dominated Italyâ€™s outdoor-cafÃ©s that many people thought Cinzano manufactured ashtrays and patio umbrellas. (Cinzano is the destination of the wine the peasants hide from the Nazis in The Secret of Santa Vittoria, a pretty story but, as Italians say, ben trovato or well-invented.)

Find your own sunny balcony and try these Sunny Italy favorites:

Named for its popularity among Americans visiting Italy at the turn of the last century, says Felten, who adds that it was James Bondâ€™s first recorded drink (in Casino Royale).

Negroni
Often credited as the creation, in 1920, of Camillo Negroni, a Florentine Count who ordered his customary Americano stiffened with a whack of gin. The making of it is a mere bagatelle, says MÃ¨re Bagatelle, the frivolous French floozie who lives and loves across the hall, in her fashion. Practice a couple a times and you win the merit badge for sure.All you have to do is put together equal measures (ounces, cups, buckets) of gin, Campari and sweet vermouth. Stir and serve up or on the rocks, garnished with orangeâ€”slice or peel. Felten, by the way, says shake. Other historians say the inventor was American, and that a real Florentine Negroni requires a sugar-rimmed glass and olives on the side. Your call.

Either might benefit from Antica instead standard vermouth, and the Negroni from some of the top-shelf gins: Plymouth, Magellan (which really is blue), Bombay Sapphire (which isnâ€™t), would be better with a bourbon Manhattan? Scientific inquiry, after all, knows no end, so do experiment amongst yourselves while Bruce and I recover from our labors.

Pored Over With Pleasure: Elliott Essman’s ‘Use Wine to Make Sense of the World’