New this year, Thirsty Reader: no lectures! No rants about the decline of reading! Instead, just a short detour to the land of electronic readersâ€”Nooks and Kindles.Â  Iâ€™m recommending them for their splendid convenience Â¶ My first Kindle weighed just 8 ounces; my latest [with a lighted screen], 15 ounces: that makes them excellent travel companions. Consider:Â  my complete Jane Austenâ€”six volumes of deckle-edged letterpress, NY, 1924â€”was and is a many-splendored thing, Â but ah, my foes, and oh, my friends, it weighs 8 lbs. My one-volume The Jewel in the Crown? Three lbs. plus.Â Meanwhile, e-books are weightless. Yes, I still love the physical presence of printed books, but progress has its place. Â¶ And now we hit the booksâ€”most of them fresh from the press, some not-so. The default gift for beginners is that king of the Vast Overviews, Wine for Dummies 5th Edition, by the duo known to many as â€™Ed and Maryâ€™ for the same reasons foodies refer to Julia Child as Julia.Â Since 1995 it has sold more than a million copies because it is clearly and crisply written, comprehensive, unintimidating and snobbery-free .What other book launched so many newcomers on confident starts in the daunting world of wine? But not that Judy Beardsallâ€™s Sniffing the Cork and Other Wines Myths Demystified is also instructive. Â¶ 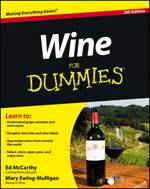 Chief among the many not-so-vast overviews is American Wine, by Jancis Robinson and Linda Murphy: the former needs no introduction and the latter not much more, as she created the wine section of the San Francisco Chronicle. They cover all 50 states: yes, Hawaii makes wine. So does Alaska [Mama Bear Red, I should think.] Also from University of California Press this year:Â Wine Atlas of Germany, and Wines of South America, with sommelier Evan Goldstein going beyond Chile and Argentina to cover the whole continentâ€”almost: Guyana, French Guyana and Suriname have yet, apparently, to get with the program. Shrinking to the regional we come upon Charles L.Sullivanâ€™s Sonoma Wine & the Story of Buena Vista, which deserves better than its drab dust jacket, and Tilar Mazzeoâ€™s double-play, Back Lane Wineries of Napa and the same for Sonoma. Greens will go for the California Wine Instituteâ€™s Down to Earth: A Seasonal tour of Sustainable Winegrowing in California. Â¶ Italy leads with its king and queen, Barolo and Barbaresco, by Kerin Oâ€™Keefe, who covers both staunch traditionalists and fractious innovators. Tom Hyland ranges Beyond Barolo and Brunello: Italy’s Most Distinctive Wines, exploring roads less traveled and wines less known. For decades now Gary Grunner andÂ Bob Lipinski have been eating and drinking all over Italy, with Gary furiously scribbling into his battered, raggle-taggle notebook. At last they have core-dumped its into the 178 pages of Italian Wine Notes. 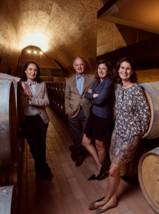 Rather less wieldy is Ian dâ€™Agataâ€™s Native Wine Grapes of Italy, whose phone-book heft results from Italyâ€™s staggering abundance of grape varieties. The weight of detail here rather smothers the authorâ€™s personality, which to me is a blessing. Of similar heft is Bob and Kathie Lipinkiâ€™s International Beverage Dictionary, whose waters are deep enough to drown in, somewhere between A Boire and Zytnia. Â¶ Too many years ago I was still a punk in wheelpants when I was bullied into interviewing Marchese Piero Antinoriâ€”and on his home turf, too.Â Too scared to decline and too dumb to lie, I sallied unqualifiedly forth: down to the Arno, across Ponte Santa TrinitÃ¡ and into Piazza Antinori, where, opposite the Cappella Antinori I turned left and unconfidently entered Palazzo Antinori. Home turf indeed. But let it be said that the Marchese was kindness and courtesy itself, innately gracious [maybe heÂ  heard my knees knocking]. Heâ€™s the same on the page as in person in The Hills of Chianti: The Story of a Tuscan Winemaking Family, in Seven Bottles, in which he writes of passing on his six-centuyry-old family business to his daughters Allegra, Alessia and Albiera.

Rather less rarefied is A Toast to Bargain Wines, George Taberâ€™s tour ofÂ  bargain country [which occasional splurges]. His chapter on [yellow tail] alone will set the snobs screaming. Â¶ If you want just one drink, try Talia Baiocchiâ€™s Sherry: A Modern Guide to the Wine Worldâ€™s Best-Kept Secret; if more than one, the Mille Vini Italian Wine Guide. Eventually youâ€™ll come round to pairing, and so to FranÃ§ois Milloâ€™s Provence Food and Wine as well as sommelier John Szaboâ€™s Pairing Food and Wine for Dummies and Food & Booze: Essays and Recipes, a salmagundi from Tin House magazine. Thereâ€™s not a drop to drink in Carol Hofbergâ€™s Morocco on a Plate, but itâ€™s here Iâ€™ve recently found some Moroccan wine, made from international varieties: Ouled Thaleb. You make wine in a Muslim country pretty much as porcupines make love. As John and Erica Plattersâ€™s Africa Uncorked explains, Â Morocco and some other Muslim countries donâ€™t officially permit wine production, but avert their gaze so long as sinners keep their heads down. Â¶ For tech types there are Proof: the Science of Booze, by Adam Rogers, Amy Stewartâ€™sÂ The Drunken Botanist: The Plants That Create the World’s Great DrinksÂ and Marni Wasserman and Amy Jeanroyâ€™s Fermenting for Dummies.

These go well with an anecdotal mixer like Fred Minnickâ€™s Whiskey Women, which one reviewer hailed as â€˜oodles more fun than a womenâ€™sâ€™ studies class.â€™ Â¶ The martini [the Fred Astaire of cocktails] and the Manhattan [the Cary Grant] have long been in the limelight; now itâ€™s Clark Gableâ€™s turn, in a double-header: The Old-Fashioned: The Story of The Worldâ€™s First Classic Cocktail, by Robert Simonson, and Albert W. A. Schmidâ€™s The Old Fashioned: An Essential Guide to the Original Whiskey Cocktail. Rather more down-home is Mark Spivakâ€™s Moonshine Nation: The Art of Creating Cornbread in a Bottle.Â  Interested in advanced technique, local produce and relentless innovation? See Architecture of the Cocktail: Constructing the Perfect Cocktail from the Bottom Up,Â by Amy Zavatto; Artisanal Cocktails: Drinks Inspired by the Seasons from the Bar at Cyrus, by Scott Beattie; Craft Cocktails at Home: Offbeat Techniques, Contemporary Crowd-Pleasers, and Classics Hacked with Science,Â by Kevin K. Liu; and The Curious Bartender: The Artistry and Alchemy of Creating the Perfect Cocktail Â byÂ Tristan Stephenson. For a little Â [much-needed] frivolity try Jeanne Benedictâ€™s Cocktail Pops and Spiked Frozen Treats.Â For a shorter title, Modern Cocktails, by Swedish bar-owner Jimmy Dymott. Â¶ The literary/celebrity angle brings us Philip Greeneâ€™s Hemingway compendium To Have and Have Another; Tim Federleâ€™s pun-laden Hickory Daiquiri Dock and Tequila MockingbirdÂ [e.g., the Are You There, God? Itâ€™s Me, Margarita]; and Tom Smithâ€™s Sinatra salute, Drink Up and Be Somebody. Â¶ If a freshly made Alamagoozlum haunts your dreams, grab Ted Haighâ€™s backward glance at the 100 recipes of Vintage Spirits and Forgotten Cocktails. For the straight skinny try The Art of the Shim: Low-Alcohol Cocktails to Keep You Level. Want to run your own bar?

Jeffrey Morgenthalerâ€™s The Bar Book: Elements of Cocktail Technique, Jenn Fiedlerâ€™s [â€™bout time we got some women in here],Â The Essential Bar Book, and Ray Foleyâ€™s Bartending for Dummies make their bids to join the classics: Â Dale DeGroffâ€™s The Craft of the Cocktail and Gaz [ex-Gary] Reganâ€™s The Joy of Mixology. Â¶ Now is it just me or, looking back on the titles above, is cocktaileryÂ  getting a tad cultish and self-serious, what with its outlandish and extravagant concoctions [one cocktail I saw recently requires 16 ingredients; three of them made from separate recipes] and artisanal ice? Faddishness breeds familiarity, and you know what comes next. Therefore letâ€™s relaxâ€”while relax we still canâ€”with beer in all its amber, foam-topped glory, as in Beer for Dummies and by The Foodieâ€™s Beer Book, a pairing guide by the pair of Brooke and Luter Fedora. Â¶ And let us not forget that good drink can be read as well as sipped, which is why I recommend Natalie Berkowitzâ€™s The Winemakerâ€™s Hand and Terry Theiseâ€™s Reading Between the Wines.

A small sample from the latter: â€˜I want to reassure you that none of what follows is a command. It is merely a proposal. Itâ€™s all right to think of wine like this, and itâ€™s all right not to.Â  . . . Wine is a tactful invitation, not a summons. But let us be available, when it asks, to go quietly soaring, because the earthbound life is finally too small. Cheers! Â©2014