They Can’t Drink, They Won’t Drink: The Holiday Quandary

Come we now to festive times, amici: Thanksgiving is behind us and Hanukkah too, but Kwanzaa and Christmas lie in wait, as do office parties, New Year’s Eve and various ad hoc jollifications. Waiting with them is the old problem of what to do for non-drinkers. Their tribe increases, what with the too-young, the too-old,designated drivers,  the allergic, the recovering and the I’d-just-rather-nots. They’re usually palmed off with Coke or San Pellegrino, which is zero-tolerance hospitality, but the more thoughtful hosts [and surely you are among them] 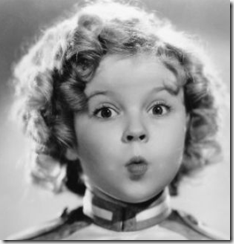 offer mocktails, such as that longtime favorite the Shirley Temple [named for the popular and perky 1930s child star] as well as faux whiskeys and low- or no-alcohol wines and beers. And surely you are among them? ¶ ‘Mocktails’ says my Huckleberry friend  Bruce Ramsay, ‘are required although rarely called for, but you do need to be able to whip up something that tastes good and looks cocktail-y, so people don’t feel out of place. At Huck we’ll shake a half-ounce of fresh ginger juice, three- quarters of an ounce each of lemon juice and simple syrup with a few mint leaves or a sprig of thyme, then strain over fresh ice in a tall glass and top with Q Tonic. We’ll garnish with more mint leaves and a lemon wheel inside the glass. It’s very tasty.’ N.B.: using Q, one of today’s top-rated tonics [up there with Fever Tree and Fentiman’s], shows that Huckleberry takes craft seriously, alcohol or no. Bruce adds this grace note:‘I read recently in Cook’s Illustrated that lemon juice actually improves after moderate oxidation, so you might squeeze a few hours ahead.’ ¶ For recipes, see Google and, as that old scribbler Irvin S. Cobb put it, ‘stand back, stand well back to avoid being splashed.’ Make them as directed or add ArKay Beverages’ no-alcohol liquor substitutes. They range from premixed mocktails to obscurities like Blue Curacao. With no alcohol, no calories and no carbs, can they match the real thing? Conduct blind tastings at your home bar and vote yea or nay. Yet 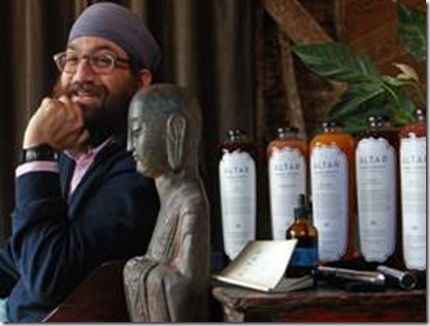 of another kind of mocktail is the Altar line of five ready-mixed ‘herbal martinis’: Chi, Bliss, Restore, Chill and—heavens to Betsy!—Aphrodisiac. The martini part is purely fanciful, the Altars contain only proprietary blends of fruits, herbs, teas and vitamins. They’re tasty enough I suppose if you like this sort of thing [I admit to goosing them a bit with Grey Goose] but what’s really delicious is the B.S. on the back label. There Altar’s founder, guru-ish, turban-topped, one-named Jagatjoti, holds forth, explaining that Altar  ‘embraces the concept of Considered Curation by hand-selecting, nurturing and looking after each ingredient, cultivating each flavor, engaging each tea’ and yada yada yada. More Grey Goose, please. ¶ There are also plenty of no-or-low wines as well. My upstairs neighbor Manny Petty, the immaculately groomed Jewish NASCAR champion, points to Fre, a new line from Sutter Home: Chardonnay, Merlot, Moscato, Red Blend,

White Zin [of course] and a brut sparkler made from unidentified grapes. All are below .5% ABV [the Red Blend sinks to .2%]. Sutter says Fre is wine stripped of alcohol by the spinning-cones process, and it’s clearly labeled as ‘alcohol-removed wine’ and ‘a grape beverage with other natural flavors.’ More dubious are the offerings of Chateau Diana and Vineyard Creek, whose dusty bottles decorate sunlit windows of bodegas, delis and supermarkets all over New York. They are always varietally labeled and often referred to as wine, and only when you peer at the label with Sherlockian closeness do you perceive wee print saying wine product. What’s that? It’s a blend [artisanal, I’m sure] of ‘wine, water, sugar, concentrated juice, natural fruit flavors, citric acid and carbon dioxide,’ according to 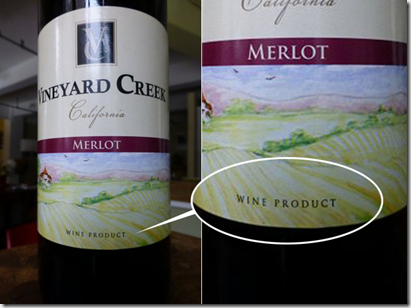 Vineyard Creek’s back label. [Ch. Diana’s Krystle Lindberg ignored requests for information.] So, as my across-the-hall smart shoppers Harriet Emptor and Penny Lane say, ‘Read the label!’ ¶ All of these wines have their limits. Some are meant mainly for desserts and picnics, others for those wary of excess in a season devoted to same. Even so, you don’t want to pay $7 to $12 for ‘product.’ Then there your low-alcohol wine, which is now readily available thanks to the Great Prosecco Eruption of recent years, which has had Californians growing Muscat hand over fist. The idea here is ‘buzz without blitz’. ¶ But beware: low-alcohol is a term loosely used. With so many wines now at 15% ABV and more, some use low for wines of 12% or 12.5%, which was standard when 13% was considered high. A more realistic low is 10%. At that level and below [5% Moscato has 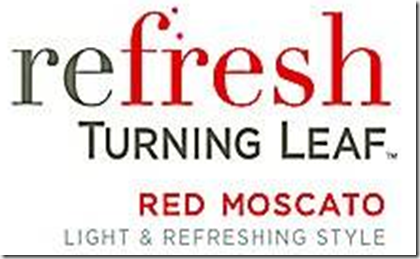 been seen] areMoscato and Prosecco, old-style halb-trocken Riesling, Portugal’s Vinho Verde and others. Gallo’s Turning Leaf label is introducing a new light quartet called Refresh. Its Moscato, Pink Moscato, Red Moscato and Crisp White are 9% every one; they’ll go down with ease and fatigue no one’s palate. ¶ My downstairs neighbor Baz Loehmann, king of plus-size musicals for well-upholstered gals, laments that he can’t find anything that even tries to be a real red. True enough, there’s no low-country Shiraz, Baz: the closest you’ll come to low here is the old-fashioned 12.5%, still common in Europe but considered tap water in Napa. A new example is Già Langhe Rosso, a ready-now blend of famous fruit—Nebbiolo, Dolcetto and Barbera grapes—made in Piedmont by Fontanafredda. And it comes in liters! ¶ Beer? Legally, beer can be labeled as alcohol-free if it has no more than 0.05% alcohol, and there are plenty of brands available. The old war horses are O’Doul’s and Kaliber; Beck’s, Kirin, Clausthaler and Erdinger are can also be found. ¶ Family fests mean youth must be served. The soda-pop crowd can easily do with store-bought stuff but a Sodastream unit can be very useful in keeping them not only hydrated but busy and [more or less] out of the way. A carbonating device, the Sodastream makes home-grown soft drinks as well as seltzer and tonic for the table and home bar. Its vast array of flavored syrups come in regular, sugar-, caffeine-free and energy-drink versions. Using Amoretti syrups, formerly available only to the trade but now available at retail, may result in less mess: the Amoretti bottles have no-spill pumps. ¶ Teenagers should be given mocktails, as in what I vaguely recall as my youth [I did have one, I think]. The girls got Shirley Temples then, and many a boy learnt that having a Horse’s Neck didn’t make him a horse’s ass. ¶ As for over-indulgence, it’s inevitable for some folks, and there are two new treatments that promise some sort of relief to the wicked. Resqwater is a vitaminized supplement that calls itself ‘what to drink when you drink,’ and says it will ‘help you return to center.’ Interpret that as you wish. It could keep you sober if used as suggested: one 8-oz. bottle for every 2 or 3 drinks doesn’t leave a whole lot of room for alcohol. Finally, ForgiveN, said to be clinically proved as an alcohol metabolizer, may [repeat: may] take away some of the pain of ghastly hangovers—no promises, though. Frankly, your best bet is to avoid needing either. Drink responsibly and have a Happy Merry.
©2013 Bill Marsano

And many thanks to Darren Tuozzoli for creating the bottle montage above—and at short notice, too.