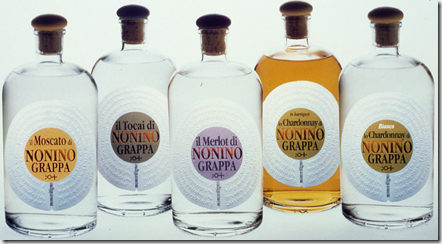 Back in the 1960s the Nonino clan began making a silk purse out of the sowâ€™s ear called grappa.

Itâ€™s Bloody Mary time in Gotham. Here at Witsâ€™ End [corner of Nathan Lane and Wistful Vista] we like to celebrate at Chez Stadium, a.k.a. the roof. Thence we gaze upon the urban ebb and flow. Truth be told it is mostly slack tide on Sunday mornings, which by rule, rune and rubric is sacred to Brunch. Â¶ Brunch began in England but was elbowed aside by mighty British breakfasts and the Jane Austenish civilities of â€˜teaâ€™. In time, America adopted brunch, then organized what had formerly been without form, and void. First, it was anchored to weekends, Sundays in particular. Second, a late start combined sleeping in with (this is whatâ€™s called â€˜the beauty partâ€™) soothing pre-noon drinking. Result: Garnished with crossword puzzles, TV sports and your pals, brunches sustain life, like water holes in the Gobi Desert. Â¶ Its foundation drink, its cornerstone and keystone, is the Bloody Mary. Here is the way of it as per Hemingway & Baileyâ€™s Bartending Guide to Great American Writers, which pairs 40-odd scribblers with as many drinks, plus anecdotes of the former and recipes for the latter.* Â¶ The Bloody Mary . . . Into a highball glass hurl ice cubes, 2 oz. vodka; Â½ oz. fresh lemon juice; Â¼ oz. Worcestershire sauce; 3 dashes Tabasco; Â¼ tsp. grated horseradish; pinches of cracked peppercorns, salt and celery salt; and 4 ounces of tomato juice. Stir. Garnish: lime wedge and celery stalk. Â¶ Disputes follow as the night the day, so to weigh them all I called upon the high and the mighty, the bold and the beautiful, the bad and the worse. In short, my neighbors. Gino da Tavola, an Italian layabout who never met a drink he didn’t like, rejects the glass and insists on a Boston shaker for proper mixing. And the vodka? Massimo Veloce, retired Formula 1 champ, skances the wimpy 2:1 tomato-vodka ratio, saying only 1:1, as in the original dusk of its being, will suffice. Mal Dente, incompetent pasta chef and periodontal intern, says â€˜Suit yourself. The ratio is strictly personal.â€™ Indeed, Mal recalls that Maxwellâ€™s Plum, the feverish New York singles meat-market bar of the â€™60s and â€™70s, stooped to 1:0. No booze at all! Exposed, Maxwellâ€™s limply claimed its Bloody Mary wasnâ€™t really a cocktail but a â€˜conceptâ€™, although that concept already had a name: Virgin Mary. Â¶ My own gripe is with the garnish. Celery? Who thought that up?** Does it have a special affinity with the other ingredients? An overwhelming reason to be here instead of the salad bar? I think not. You want something to go with tomatoes, youâ€™re talking basil, Thirsty Reader. And as basil has no better friend than Italy, I have Italianized the whole shebang. Thus: La Maria Sanguinosa . . . 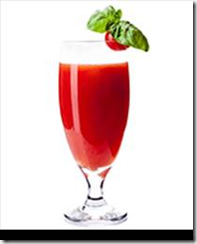 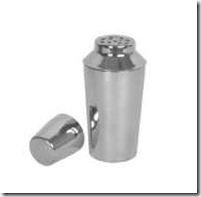 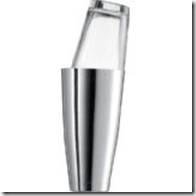 A dinky David Niven-style gadget [left] is no great shakes compared to the brawny Boston Shaker.

dried rosemary, two or three crushed dried pepperoncini, a pugil [big pinch] of salt and 4 ounces Italian tomato juice. Taste, adjust seasoning to taste, add 3 ounces of Italian vodka. Mix, pouring from one half of the shaker to the other a few times; finish in an ice-filled highball glass; garnish with a fragrant basil sprig. That is a Maria Sanguinosa. Â¶ Now to make Italian tomato juice, you purÃ©e a 28-oz. can of peeled Italian plum tomatoes [better: San Marzano] in your Cuisinart. Be sure theyâ€™re really Italian, not Italianish; i.e., only vaguely plum-shaped, and grown elsewhere. I shop BuonItalia, in Chelsea Market, where the owner, Mimmo [brother to SD26â€™s Tony May], is attentive to such details. His leading brand, organic AgriGenus, makes a thick, almost seedless purÃ©e that thins with water to any thickness you like. Mimmo stocks Sicilian sea salt, too. An excellent choice, too, is Academia Barillaâ€™s Pomodorini Pelati, a.k.a. peeled cherry tomatoes. Â¶ As for the alcohol content, Italy offers several brands of vodka, among which the reigning campione seems to be one of the newcomers, the highly rated Purus. List-priced at $36, itâ€™s often available for as little as half that. Distilled from certified-organic Piedmont wheat and pure alpine water in an eco-friendly plant,

Purus wears a tree-free label printed in soy-based ink, to the delight of Greens all over. Sadly, itâ€™s distributed all over, but it is well worth seeking out. Despair not: you can find it online. Â¶ But then,  why not try   grappa, the splendid spirit that Italians distill from industrial waste, i.e., pomace, the rubbish found at the bottom of the wine press. [Talk about trash into treasure.] The most celebrated of brands, and deservedly so, is Nonino, named for a family of distillers in Friuli-Venezia Giulia, a region that is Italyâ€™s Far East. The 115-year-old Nonino company, which is ruled over by mamma Giannola Nonino and daughters Cristina, Antonella and Elisabetta, has been grappaâ€™s leader in quality and innovation since the 1960s. Other distillers have followed the Noninosâ€™ lead, Sibona, Domenis, Ceretto, Jacopo Poli, Nardini and Villa de Varda among them. Theirs are quality products [theyâ€™re Italian, after all], but they are significantly less known because only Nonino has become synonymous with grappa. But one caution is required: grappas run from 70 to 120 proof, so it is well to check the ABV on the label. Â¶ So there you have it, La Maria Sanguinosa, ready for you and a summer of Sundays, and any other days as well. Â¶ Now it remains only for us to add here a brief note about our much-admired friend and mentor, our rock, our guide, our help in ages past, Hizzonor M. Bloomberg. To wit: In 2009 he declared Oct. 5 Bloody Mary Day. Imagine that! Did he actually drink one on that occasion? That is not recorded, as the report comes from the one-time newspaper-of-record New York Times, but if he did, we may be sure that it was a very small one. Â¶ Salute!
—————————————————————————————

*For example, the Guide pairs Raymond Carver with the Bloody Mary and says that Carver once â€˜invited friends to a party, but failed to attend as he got drunk in another cityâ€™.

**Itâ€™s said to have been added at a customerâ€™s request in Chicago, which city is responsible for some of the nationâ€™s worst pizza. But who knows? The drinkâ€™s history is truly a shakerful of confusion. The name has been laid to a popular waitress, to Mary Pickford and to a Protestant-pummeling Queen of England. The drink may have been invented in the 1920s or 1930s or whenever by George Jessel and then improved by Fernand Petiot at Harryâ€™s New York Bar in Paris or in New York, at the King Cole bar of the St. Regis Hotel, or by Henry Zbikiewicz,  of â€˜21â€™. It either is or is not precisely the same as a drink called the Red Snapper.

How to Write About Wine for the Slicks: A Beginner’s Guide