. . . and minds, tooâ€”but in declining numbers these days. Anecdotal evidence comes from the housing market. Real-estate agents and â€˜stagersâ€™â€”the people who dress up empty houses so they look lived-in and buyableâ€”think books are dowdy and old-fashioned. Bookshelves are always small; they display mostly arty knickknacks and tchotchkes, with maybe a few books on the side. Â¶ Bookcases are not tolerated.

Design layouts and home-dÃ©cor shows are filled with of houses [always called â€˜homesâ€™] that are empty of books. Â¶ Contrary as ever, Iâ€™m back again to argue for books as gifts this Christmas,* for La Dickinson was right; there is no frigate like a book, etc. . .  for vineyards near and far; for sweet private pleasures and armchair reveries of wine and spirits; for the people who make them and love them. Thereâ€™s much to settle into in this yearâ€™s harvest, and Iâ€™m going to throw in some titles from past years as well. Why the oldies? Because writers can use a little support, you know. Anne Lamotte has written that she once thought being published would be â€˜an affirming and romantic experience, a Hallmark commercial where one runs and leaps in slow motion across a meadow filled with wildflowers into the arms of acclaim and self-esteem. This did not happen for me.â€™ So drink deep, Thirsty Reader. Â¶ This yearâ€™s magnum opus is Wine Grapes: A Complete Guide to 1,368 Vine Varieties, by Jancis  Robinson, Julia Harding and JosÃ© Vouillamoz. Huge, heavy, scholarly but not at 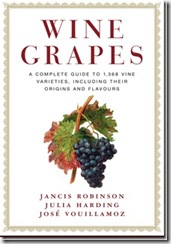 all turgid; it is filled with vintage prints. As a book per se itâ€™s not so hot because its low-contrast type and text crammed into the gutter can be tough to read; likewise, to get the straight skinny on Malbec, say, you needs must see under CÃ´t, a name that is known to few and used by fewer. You get all this for $175 or your first-born child, but despair not, amici mie. My new nextdoor neighbor is Bernie MÃ©doc, a nÃ©gociant who surfs the net from his cell at Club Fed; heâ€™s seen it on Amazon for a piddling $110 plus shipping, and other retailers online and off will surely go along. Â¶ Durable, useful and affordable, Wine for Dummies, by Ed McCarthy and Mary Ewing Mulligan, is back with its fifth Edition. Their book has sold more a million+ copies in 37 languages since 1995, so if the your question is â€˜Who has really been spreading the word on wine?â€™ the answer is EMc and MEM. 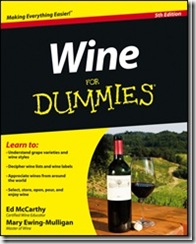 They have expanded their reporting on of Southern Italy; emerging Spanish regions; Argentina; the Sonoma Coastâ€™s wineries; Schramsberg; and blogs; theyâ€™ve also updated their vintage chart. And more, but Iâ€™m out of semi-colons. Why a new edition now? Mary says that â€˜Evolving online sales, blogs, cellar-management sites, online "communitiesâ€ and apps mean the wine world is not the same place it was even just six years ago.â€™ You got a problem with that? Â¶ A handy companion will be Alan Youngâ€™s Making Sense of Wine Tasting: Your Essential Guide to Enjoying Wine. Â¶ Italy: itâ€™s so small it could be the seventh-largest American state, and globally itâ€™s not really very far ahead of Burkina Faso. Thus it has been thoroughly raked-over lo these many years, so can can conclude that Italy been done, right? OK, but then Tom

Hyland turns up to discover grapes and producers that most people have never even heard of. Tintore, say, or Bianchello and Torbato; and Didier Gerbelle, Emilio Bulfon, and I Cacciagalli. This lot and many more can be found in Hylandâ€™s Beyond Barolo and Brunello. Â¶ UCal Pressâ€™ Finest Wines series stakes out terroirs in Champagne, Rioja, Tuscany, Bordeaux, Burgundy, Germany,  and California. Then there are The Complete Bordeaux: The Wines The ChÃ¢teaux The People and Saint-Ã‰milion, a large-format text-and-photo love letter from the besotted Philippe Dufrenoy and Jean-Marie Laugery. For Malbec Nation, latch onto Sgra. Laura Catenaâ€™s Vino Argentino, which to wine by the long ton adds useful touring information and recipes, too. Howâ€™d she find the time? Gaucho Marx tells me sheâ€™s a wife, a mother, an M.D., a producer in her own right [Luca is her label] and strong right arm of her distinguished dad, NicolÃ¡s, of Catena
Zapata. Even father afield is The Top 100 South African Wines & Wine Lists, while closer to home are Washington Wines and Wineries: The Essential Guide, by Paul Gregutt and The New Connoisseurs’ Guidebook to California Wine and Wineries, by Charles E. Olken and Joseph Furstenthal. Â¶ Daniel Okrentâ€™s Last Call, a superb tale of Prohibition days, is often hilarious, and itâ€™s also important: the prohibitionist urge yet lives amongst us; itâ€™s a snake that wonâ€™t die. Okrent is excellent on the con jobs, lies, hypocrisy, political chicanery and relentless bullying that led to the Ignoble Experiment. Read

and learn, Thirsty Reader, read and learn. It will go down well with Andrew Barrâ€™s Drink: A Social History of America and Richard Mendelsonâ€™s From Demon to Darling. Thomas Pinney covers The Makers of American Wine while Patrick E. McGovernâ€™s Ancient Wine goes back, way back: to the Stone Age, actually, and so does Tom Standageâ€™s History of the World in 6 Glasses. Charles L. Sullivan has a tighter focus in Zinfandel: A History of a Grape and Its Wine. The lighter side, a.k.a. Bar Bet Trivia, is found in The Curious World of Wine: Facts, Legends, and Lore, by Richard Vine. Really. Â¶ For more books that have actual writing in them see Coquilles, Calva, and CrÃ¨me: Exploring France’s Culinary Heritage by G.Y. Dryansky and Joanne Dryansky, who took a slow boat to France in the â€˜60s and stayed there. Gerry was once a bigshot fashion reporter, so he serves much delicious but not malicious gossip from that world-let [e.g., RÃ©gine misses a fancy party when her elephant gets lost in the Bois de Boulonge; the Duchess of Windsor takes the floor, so to speak, at a resto superbe where the facilities, well, ainâ€™t] and thereâ€™s a leisurely voyage into la france profonde and the small restaurants, small fÃªtes and small villages that are struggling with changing times, spendthrift ego-feeders and the EUâ€™s swollen tribe of power-crazed officials and

bureaucrats. Harriet Welty Rochefort later followed in the Dryanskysâ€™ wake, marrying a Frenchman, his family and France, too. Now she spills les haricots in her Joie de Vivre: Secrets of Wining, Dining, and Romancing Like the French.Â¶ James Conawayâ€™s earlier and excellent non-fiction books on Napa Valleyâ€™s heroes and villains [read those, too] inspired his fiction: Nose, a mystery thatâ€™s funny, witty and murder-free. The plotâ€™s maguffin is a wine: a mysterious Cabernet that tantalizes Napa no end and provides targets for Conawayâ€™s sharp elbows: cult wineries, ridiculous geekspeak, self-important bigshots, land abusers, chemical polluters, and the overall cheapening of Napaâ€™s heritage [although I guess they call it a â€˜brandâ€™ these days]. Also lifestyle pomposity and hard-eyed lawyers, courtesy [da-dum!] of a blogger who knows too much. A blogger hero? Who knew? Â¶ Gourmet magazine sank ingloriously under a misguided quest for hipness, but longtime columnist Gerald Asher didnâ€™t go down with the ship. A Carafe of Red, his latest collection of essays, recalls how good it was and he still is, and so does his earlier A Vineyard in My Glass. Â¶ The newest of American heroes is the Self-Reinventor, who, say in midlife, leaves a desk job in Chicago and hauls his family west to make wine, despite knowing nothing about it, and who yet manages to create what Mr. Parker called â€˜one of the worldâ€™s greatest wineriesâ€™. Sounds like John Shafer of Shafer Vineyards, and it is: A Vineyard in Napa is written by Johnâ€™s son Bill and
Andy Demsky. Â¶ Doers, dreamers

and DIYers will enjoy Sheridan Warrick on The Way to Make Wine; Deborah M. Gray on How to Import Wine, and Christina Perozzi and Hallie Beauneâ€™s The Naked Brewer. Tempted? Then turn to Bill Owensâ€™ How to Build a Small Brewery. Darek Bellâ€™s Alt Whiskeys aids and abets the would-be craft distiller, as do The Craft of Whiskey Distilling, Modern Moonshine Techniques, 99 Pot Stills and The Art of Distilling Whiskey and Other Spirits, all by the busy Bill Owens. Armchair  enthusiasts are more likely to sink into Whiskey and Philosophy, Fritz Allhoff and Marcus P. Adamsâ€™ fireside book, and two global tours, Whiskey Opus and World Whiskey, a pair of typical Dorling Kinderseley products: they are well-made books, profusely illustrated, highly legible and thoroughâ€”right down to the two single malts that are currently made in Pakistan. What?

Â¶ Perhaps that calls for a drink. A vintage cocktail, say. Richard Bennett is eager to guide your choice in The Book of Gin, which takes its place beside Gary â€˜Gazâ€™ Reganâ€™s The Bartenders Gin Compendium. Both books help to keep gin, a truly sophisticated spirit, from being drowned by tsunamis of vodka, a spirit that is, by contrast, merely refined. Chicagoâ€™s Hearty Boys, Steve McDonagh and Dan Smith, offer an array of â€˜old standardsâ€™ cocktails 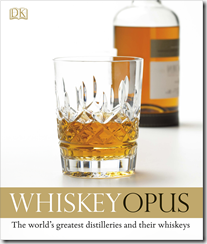 in The New Old Bar: Classic Cocktails and Salty Snacks, and Philip Greene, who just happens to be one of the founders of the Museum of the American Cocktail in New Orleans, mines the literary past in To Have and Have Another: A Hemingway Cocktail Companion. Â¶ Now what more can I say except . . . READ RESPONSIBLY!