Shakespeare is always an inspiration to me, and a passage from one of his history plays seems apropos just now:

For God’s sake, let us sit upon the ground
And tell sad stories of the death of kings;
How some have been deposed; some slain in war,
Some haunted by the ghosts they have deposed;
Some poison’d by their wives: some sleeping kill’d
–Richard II

To which I iambically add:

And ‘mongst those Princes number now by dint
Of sword-like pow’r and grandeur lordly Print!
Undone, laid low by electronic strife,
Like Python’s parrot, ‘tis bereft of life!
Look you! See in ev’ry Nook and Kindle
Fell triumph of ‘Please don’t fold or spindle.’
Punchcards were once meant for bills and wages,
Now they’re bytes that gobble up our pages!
I needs must warn sans buts or ands or ifs:
Beware thee alway of Geeks bearing gifts.
–found in Old Saint Paul’s Church, Baltimore

So before going placidly amid the noise and haste to my New Year’s list of recent drinks books, I’ll add mine own lament for print. It’s a little sad, I know, so I’ll just sit here and rant for a bit and then shut up.

I grew up in print. I have set type by hand using only a California job case and a brass ‘stick,’ things that are now found mostly in flea markets. Each stick represented a paragraph or so*.It was then ‘proofed’ on ‘wheatstraw paper’. Letterpress printing, voila! I’d do it for hours at a time for the pure pleasure of it.

The California Job Case, the most popular among many case designs. The term ‘lay of the case’ refers to the compartments for letters, punctuation marks and other bits of lead. Typesetters learnt the lay of the case as typists their keyboards. Image courtesy of briarpress.org.

My first job was proofreading for three cynical trade rags** whose office was in two parts. One, so dreary that cubicles would have been an upgrade, held me, four editors and a few war-surplus linoleum-topped desks for the seldom-seen ad staff. Beyond was the Dickensian composing room, into whose sweaty depths I delivered page-proofs for correction.

Hot, noisy and intermittently dangerous, this hell-hole enshrined four towering Linotype machines. Ugly, infernally complicated and about 8 feet tall, the Linotype was a high-speed electro-mechanical type-setter. It used the ETAOIN SHRDLU keyboard, which took full advantage of fast fingers. [The QWERTY keyboard dates to the 1870s, when typists had to be as slow as their typewriters.] 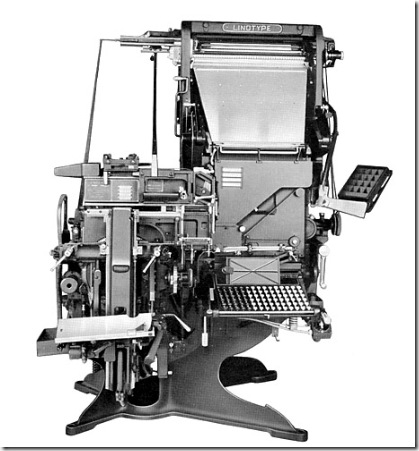 A Linotype in sales-catalogue dress. Multiply this too-clean image several times, add terrific heat, crowding, noise, dirt and the smell of hot lead and printer’s ink to get an idea of an over-worked, under-pressure composing room of 50 years ago.

Invented in the early 1880s by a German immigrant named Ottmar Mergenthaler, the Linotype soon conquered book and newspaper  publishing. Almost as fast as an operator could type it clamped brass letter-molds called matrices in a vise, filled them with molten lead and produced a one-piece ‘slug’—a line o’ type—then spit it out to be composed into paragraphs and pages for proofing. This paragraph, for example, would represent 10 slugs. [See Linotype machines in action in the upcoming film Linotype. There’s a link to the trailer at the bottom of this column.]

It was incredible then [who could imagine its 10,000 parts casting hot lead inches from its nonchalant operator?] and is more so now [who can believe the world’s press once depended entirely on this 19th Century contraption?].

For all its Goldbergian grandeur the Linotype was in the end no more than another T. Rex, an apotheosis, yes, but of a primitive and doomed technology. Like the Clipper ship, the piston-engine Lockheed Super Constellation and the Hudson 4-6-4 steam locomotive, it was the mighty apex of an ingenious age, born on the cusp of a Great Extinction.

Perhaps all is not lost, not yet. Publishers, who as a rule prefer to improve the shining hour by cheating authors with confiscatory contracts and opaque royalty statements, have lately tried making books more physically attractive—more pleasing to hold and behold—according to The New York Times. What a concept. Must have struck ‘em like a thunderbolt. Meanwhile, your conventional booksellers*** say printed books suddenly regained some of their lost ground over the Christmas holidays. Maybe it’s because there’s not much warmth in a gift card reading:

Print, my dear, is old hat, so outmoded!
Hence your Christmas book must be downloaded!

Mixology, bartendering, bar-cheffery—by any name, it’s pouring books as well as drinks. A.J. Rathbun has a quartet: Luscious Liqueurs, Wine Cocktails, then Champagne Cocktails and finally Ginger Bliss and the Violet Fizz: A Cocktail Lover’s Guide to Mixing Drinks Using New and Classic Liqueurs. All useful, but I fear A. J.’s prose style has declined since his splendid Good Spirits debut. Blind pigs have gone from illegal to, say publicists, exclusive, upscale, even celebrated. Hence Speakeasy: The Employees Only Guide to Classic Cocktails Reimagined, by Jason Kosmas and Dushan Zaric, and The PDT Cocktail Book, by Jim Meehan and Chris Call. Backward glances: Brian Van Flandern and Laziz Hamani’s Vintage Cocktails and a brace by the bracing Dave Wondrich, Imbibe! From Absinthe Cocktail to Whiskey Smash and Punch: The Delights (and Dangers) of the Flowing Bowl. Not to forget, please, James Waller’s revised, updated and often witty Drinkology and, for those who plan ahead, Anthony Giglio and Jim Meehan’s Mr. Boston Summer Cocktails.

Long before wine writing descended into the murk of scores and tasting notes there was the pleasure of Gerald Asher’s monthly essays in Gourmet—until a new editor reduced him to recommending pairings. Was Gourmet otherwise dumbed-down, as in the issue devoted to recipes from TV sitcoms? The mag’s shut-down in 2009 was laid to cable-TV shows and other competition for ads, but maybe the editor was distracted by writing three books, editing two recipe collections, giving lectures and doing a TV series. Fortunately, the man Frank Prial once called a poet hasn’t disappeared for good, as evidenced by his latest book, A Vineyard in My Glass. Buy it.

Crime is the star of Max Watman’s nifty Chasing the White Dog: An Amateur Outlaw’s Adventures in Moonshine and Daniel Okrent’s even niftier Last Call: The Rise and Fall of Prohibition. Watman blows the whistle on the romance of moonshining and pretty much blows up his kitchen, too. Both are well-written, especially Okrent’s: I think it’s the best book on temperance lunacy since The Life and Times of the Late Demon Rum by J.C. Furnas. [Furnas’s other great accomplishment was to expose Lillian Hellman’s Julia fraud.]

The how-to and self-help stocking is well-stuffed as ever, what with Drink This: Wine Made Simple, by Dara Moskowitz Grumdahl; The Everyday Guide to Wine [2 paperback books and a DVD], by MW Jennifer Simonetti-Bryan; the expansively titled  The Sommelier Prep Course: An Introduction to the Wines, Beers, and Spirits of the World, by Michael Gibson; 100 Perfect Pairings, by Jill Silverman Hough; The Food Lover’s Guide to Wine, by Karen Page and Andrew Dornenburg;

Making Sense of Wine Tasting: Your Essential Guide to Enjoying Wine [5th edition], by Alan Young; Secrets of the Sommeliers: How to Think and Drink Like the World’s Top Wine Professionals, by Rajat Parr, Jordan Mackay and Ed Anderson; Authentic Wine: Toward Natural and Sustainable Winemaking, by Jamie Goode and Sam Harrop MW; and for reinvention purposes, How to Import Wine, by Deborah M. Gray.

Liquid-specific entries include The Bartender’s GIN Compendium, by master cocktailian Gary Regan; Grandi Vini: An Opinionated Tour of Italy’s 89 Finest Wines, by Joe Bastianich; Real Men Drink Port—and Ladies Do Too!, by Ben Howkins; The Craft of Stone Brewing Co.: Liquid Lore, Epic Recipes, and Unabashed Arrogance, by Greg Koch, Steve Wagner and Randy Clemens; Madeira, the Island Vineyard [2nd edition], by Noel Cossart and Emanuel Berk; and The Finest Wines of California: A Regional Guide to the Best Producers and Their Wines. It’s part of a series that includes individual volumes on Chianti, the Côte d’Or, Tuscany, Champagne, Rioja and Bordeaux. And it pairs well, as they say, with Paul Strang’s South-West France. MW Benjamin Lewin, knight-challenger of wisdom received and conventional, does so twice, in In Search of Pinot Noir and in Wine Myths and Reality.

While impatiently awaiting the 4th edition of Jancis Robinson’s The Oxford Companion to Wine you can profitably adopt the CIA’s 3rd of Exploring Wine, by Steven Kolpan, Brian H. Smith and Michael A. Weiss; and Opus Vino, by Jim Gordon.

And when you’re ready to dig in, try The Kentucky Bourbon Cookbook, by Albert W.A. Schmid and Dean Fearing, and Italian Home Cooking, by the award-winning Julia della Croce. In my kitchen Italian cooking is home cooking, but that never stopped me from adding more Italian cookbooks to my shelf before and it isn’t about to stop me now. And don’t forget The Winemaker Cooks, by Christine Hanna (see below) , cook, looker and president of Sonoma’s Hanna Winery & Vineyards. 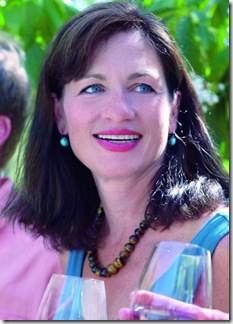 As soon as I can I’ll make something to go with the following recipe, kindly provided by Chef Schmid: It’s called The English Professor’s Kentucky Bourbon Marinade, and it goes like this: Mix equal parts of bourbon, soy sauce and pineapple juice. Add a few [or a few more] Szechuan peppers, if you like. In it marinate chicken [up to 1 hour], pork [2-3 hours] or beef [at least 4 hours]. Pan-fry or grill. You’ll still have 364 days to cook Italian.

Now then, lest I appear to have gone soft-centered on you, I will here cite the two worst books I’ve read in a coon’s age or donkey’s years, whichever is longer. They are, for your edification and dismay Boozehound: On the Trail of the Rare, the Obscure, and the Overrated in Spirits, by Jason Wilson, and The Wild Vine, by Todd Kliman, You have been warned.

If you right-click on any of the above titles you’ll be able to ‘open’ Amazon and order directly.

For lagniappe here are a few of my own reviewer’s tips. For example, if the flap copy says anything like ‘ . . . teaches writing at . . . ‘ and/or mentions an author’s work with NPR, odds are it’s best to am-scray whilst still thou canst. In the Acknowledgments, danger signs include fulsome praise for the editor, who probably did nothing more than praise and grin [editors don’t have jobs—they have lunch] and the copy editor, who has likely missed author errors by the long ton while [if really on the ball]—adding factual errors of her own devising. Also, Amazon’s reader reviews have gained importance as professional reviewers, to quote the poet-pugilist Mike Tyson, ‘fade to Bolivian’. But be sceptical. Many of its 5-star reviews seem to be mere empty raves by enthusiasts and the ignoranti. The few-star reviews more often show knowledge and critical perspective.

And a Happy New Year to All!

Linotype the movie is expected to arrive in theaters some time next month. See the trailer below:

*Hence ‘two sticks on  page 12,’ journalese for a story that is insignificant or being downplayed.
**One of them, U.S. Tobacco Journal, supposedly founded by Oscar Hammerstein I.
***Societal outcasts; pariahs who own actual, you know, like stores, yo?