Wine on Screen—and Off

The recent Golden Globes ceremony was the dullest in years, especially for an event that has preened itself as being so much unbuttoned fun as compared to the staid, stolid and stuffy Oscars. Some people blamed the eveningâ€™s tedium on the spew of bath-room vulgarities His Smugness Ricky Gervais mis-took for wit. No doubt they played their part, but surely a paucity of drink came into it. Oh, sure, here and there a bottle of MoÃ«t poked its lonely neck out of a bucket, but the primary refreshment on the starsâ€™ tables was water. Bottles in abundance and even superabundance littered the GG tablesâ€”big, tall bottles, too, that were clearly visible to all and especially to sundry. Smart Waterâ€”that was the brandâ€”proved ideal for diluting merriment, but no doubt any brand would do. Thereâ€™s a reason toasts arenâ€™t given in water.

Still, wine alone canâ€™t save a rum show. The SAG Awards were similarly boring, despite bumpers of Taittinger and tsunamic quantities of Dry Creek Vineyard available for social lubrication. Kim Stare Wallace, a.k.a. Mrs. DCV, long ago got the Screen Actors Guildâ€™s â€œofficial wine ofâ€ status for the wines she and her husband, Don, produce in Healdsburg, so tables at the event were well irrigated by a vari- ety of their labels. The list included the â€™08 SAG Awards CuvÃ©e (naturally) Heritage Zinfandel and Foggy Oaks Chardonnay, as well as the â€™09 Sau- vignon Blanc and â€™07 Cabernet.

A lineup like that, with Taittinger into the bargain, should have fueled jollity aplenty, so what do you suppose happened? Iâ€™m betting that the killjoy here was interrupting the proceedings with a tribute to 94-year-old Ernest Borgnine that would have made a junior-high film club blush and was interminable to boot. Scholars even as we speak are debating its length, some saying five hours, others arguing for six, still others claiming that infants were born, weaned and seen safely through kindergarten even before the McHaleâ€™s Navy clips turned up. Neverthe-less, Borgnine, who deserved far better, seemed to be cheerful enough when the thing finally ground to a halt, but I think that was mostly because a] it was over and b] heâ€™d just turned 95. 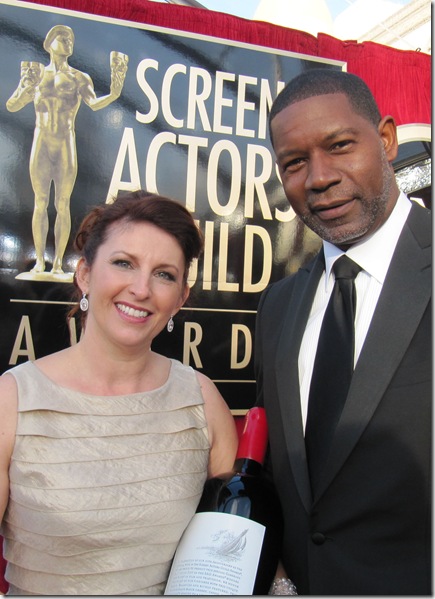 Can we hope for better from the Oscars? Donâ€™t bet on it. As with the Golden Globes and the SAG cere-monies, the thing that will shine through all the fashions, tailoring, styling, jewelry and accessories is the embarrassing fact that stars making a zillion bucks a picture are tongue-tied twits unless they have a script in their hands.

And speaking of wine on the screen . . . Last year about this time I mentioned to an importer that I liked The Olive Gardenâ€™s TV commercials because they always showed wine on the tables, which, I added, somewhat redeemed the chainâ€™s fake-Italian cuisine (notably the â€œTuscan Garlicâ€ menu). â€œDonâ€™t knock The Olive Garden,â€ said the importerâ€”theyâ€™re one of our best customers.â€

No more. After seeing the latest Olive Garden com- mercials I got the importer on the phone and said â€œJust so you know: your best customer seems to have given up on wine. His latest ads still have glasses on the table, but almost all of them are full of beer.â€