Eat In, Take Out, Go Kosher

My neighbor Manny Frego, who is salty of speech and wise in his ways, and who was once chief cantor of the ghetto of Rome, gives as his opinion that ‘If it weren’t for carciofi alla giudia no one would know a damned thing about Italian Jews or Italian Jewish cooking or Italian kosher wine’. That’s largely because Italy’s Jews have long been a highly assimilated subgroup (one reason is that as a rule they spoke Italian or the local dialect rather than Yiddish or Ladino). They were successful in the arts, politics, the professions and even the military (to the extent that one can put military and success in an Italian context). At the same time, they maintained their religious traditions in varying degrees and still do today, and home and abroad.

Which brings me to Tony May and his SD26, the incarnation of his original outpost, the beloved old San Domenico of Manhattan’s Central Park South. Ad SD26 Tony has a co-owner. It’s his daughter, Marisa, who adds fresh, youthful beauty beside Tony’s increasingly Bill Clintonesque silver-fox handsomeness. (I hate that man! Envy is an ugly thing and I know it, but that doesn’t stop me.) 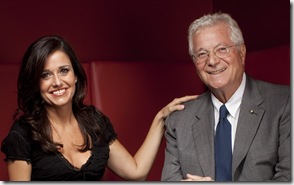 The new place is sleekly modern and the space is vast, with a long stroll separating the front bar zone from the main dining rooms, which itself has what amounts to a loge level of private rooms above for larger parties and what Italians call eventi. Down–stairs is the eat-in wine cellar, scene of a long and very wet Sassicaia dinner last year.

As for the menu, the important thing just now is the kosher menu for the High Holy Days, called 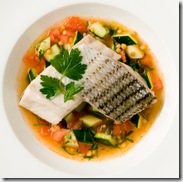 The three wines, which are also strictly kosher, are by Sentieri Ebraici: Del Vecchio Vino Rosso, white Dona Gracia and sparkling Gioia Vino Spumante. The Sentieri Ebraici wines are among the few Italian kosher wines to escape Royal, the Goliath, if you will, of New Jersey (Winebow signed the line instead. The wines are made by Degli Azzoni Avogadro Carradori in Marche, a mid-calf region on the Adriatic coast.

Then come Coffee and Biscotti and, I venture to suggest, a warm glow of contentment accompanied
by a pronounced lack of interest in leaving the premises. So you might as well have a grappino.

I have to confess that I often imagine myself dining here in SD26’s imperial-modern space. And dining not only often but (di fatti ) rather splendidly, until some killjoy slaps me awake.

Photo of Marisa and Tony May by Robert Caplin