LoatherCon, our annual festival of cringe-making gifts for the drinking class, convened once again at Paradeâ€™s End, corner of Lois Lane and Della Street, for the customary mockery and merriment. And for lagniappe we even came up with some good gifts. Â¶ For example, making ice balls no longer requires Williams-Sonomaâ€™s $1100 appliance now that less

Theyâ€™re advertised as â€˜uniquely awesome,â€™ so of course they cost $120. Flemish Bond, the Belgian mason and secret agent, brought some Gabbiano Bellezza Chianti Classico [yay!] and a pair of wooden martini glasses [boo!]. Sure to spoil the look of any cocktail, theyâ€™re $110. Â¶ Irk Bogarde, the cranky matinee idol, brought a bottle of Stagâ€™s Leap Pine Ridge Cabernet and a Buck Rogers weapon to open it with: the $50 Skil iXO Vivo cordless corkscrew. Heavens to Betsy! The iXO Vivo may be fine for caterers, but for home use? Noisy. And beware:

when itâ€™s on itâ€™s at full power, so it can tear fragile corks in two. Still, it comes boxed with a foil cutter, stopper and screw driver bits. What next, a screwcap remover? Â¶ When it comes to storing leftover wine, your best bet is still that old stand-by, the VacuVin, because the alternatives are largely Dumb and Dumber. Notably Metrokaneâ€™s Rabbit Electric Wine Preserver, a $40 failure that was lugged in by Bangalore, the lubricious Bollywood chanteuse. We tested it on her Zaca Mesa Syrah and found it [the Rabbit not the wine] wanting. It takes three times as long as a VacuVin to form a vacuum that isnâ€™t nearly as good. Two vacuums, actually: the second is between the Rabbit and the stopper itself, so itâ€™s tricky to remove the Rabbit without breaking the vacuum in the bottle. Baba Ganache, eastern mystic and chocolatier, padded by with her $25 Air Cork. Looking disturbingly like an 1890â€™s quack medical device, itâ€™s a squeeze bulb with a hose and an air

bladder: push the bladder into the bottle and pump it up; later deflate and remove as needed. It worked well enough on Babaâ€™s MacRostie Pinot Noir, but online are many beefs: the fragile bladder readily ruptures or leaks or falls off the tube. In any event, the thing is hideous. Â¶ My nextdoor neighbor Gary Indiana, a deservedly neglected Pop Art hanger-on, turned up with the oddest gift of all, a $70 pair of Inside-Out champagne flutes from the Museum of Modern Art Design Store. Marginally known for a single derivative sculpture, Gary complains that a] heâ€™s been overtaken by a Facebook icon and that b] the flutes, like so much of modern design, are longer on looks than on function. The I-O flute is merely an insulated glass with a fancy price. Yes, it will keep bubbly cool and yes, it has the snazzy look of a field marshalâ€™s baton. But now the bad news. Its thick lip makes for sloppy slurping rather than sophisticated sipping, and it holds a skimpy three ounces, not the claimed four. Worse, you canâ€™t actually drink all three: a vacuum forms in the skinny stem of the 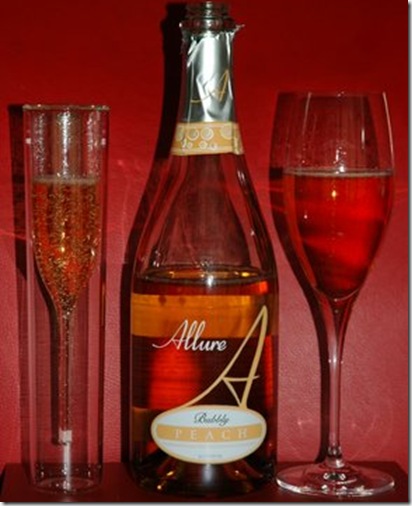 glass, preventing some from pouring out. Not much mind you, but when itâ€™s miserly three-ounce pour, I want it all, whether itâ€™s Henriotâ€™s Anniversary Brut or Schramsberg Reserve, J Brut RosÃ© or Happy Bitch Frizzante. After all, hosts who offer their guests stingy three-ounce pours donâ€™t serve seconds. Instead get Riedelâ€™s Celebration flutes, which cost about half as much but hold more than twice as much. Â¶ A trio of what marketers call â€˜gifts for those who have everythingâ€˜ []i.e., gewgaws] was brought forth by Baskinâ€™ Robbins, the Audubon Society tanning champion. First up was a cork presenter from Alessi, the high-style and high-priced Italian design outfit. This $32 objet is a wee sort of tray whose â€˜role is fundamental in the courtesy of the contemporary serving styleâ€™ of, I imagine, your very

toniest sommeliers in your very toniest restaurants. Anything for a laugh, I suppose. Next came Le Creusetâ€˜s cork catcher, only $40, and in â€˜antique chrome,â€™ too. Itâ€™s for hopeless cases who canâ€™t broach the bubbly without risking ballistic catastrophe. Apparently there are enough such folk that some bottles, notably those from Woodbridge and Barefoot Cellars, now actually bear warning labels, doubtless breaking the hearts of lawyers everywhere. Finally, the Vinamor: itâ€™s the latest entry in the wine-aeration game, surely not the last but probably the most original. Does it work? Opinions on aerators are bitterly divided. The nays may be mere skeptics and the yeas may be guided by the powers of suggestion, faith and imagination. Whatâ€™s certain is

that the Vinamor sits a tad precariously in most stems, and that with each use you have to deal with something thatâ€™s large, clumsy and dripping. Still, the Vinamor did win support on Shark Tank, the television show that matches cash-poor inventors with arrogant well-heeled suits. As for the rocket-science behind Vinamor, itâ€™s simply this: a wire sink strainer of the type sold in multi-packs at dollar stores and a glass ball to spread the wine a bit. That leaves adequate room for profit in the $25 list price on the Vinamor website, and that seems fair. The thing is properly made of glass, not molded plastic, and so it must be hand-made. And greedy Amazon demands $40 for the same item. Way to go, Jeff Bezos. Â¶ And thatâ€™s it for LoatherCon 2014. All in all, a charmingly lame collection, and thereâ€™s surely much we couldnâ€™t cover, because bad gift-giving, like many other crimes, is notoriously under-reported. Like the chumps who spend fortunes on counterfeit wines, many victims are too ashamed to fess up; others cynically resort to re-gifting. None of either reside at Paradeâ€™s End, just as none got, or would use, a Le Whaf. Thatâ€™s a device which for reasons 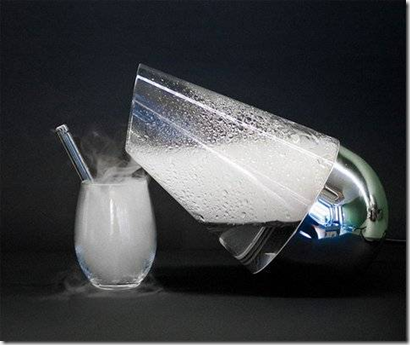 mysterious and obscure turns your drink into a cloud or mist which to be inhaled through a straw. Truly. Thanks lots, but Iâ€™ll just sip and savor, OK?