The summerâ€™s gone, and Heavenâ€™s to Betsy, all the roses falling. Thatâ€™s the way of it here in Gotham, where burning Sappho loved and sung. Oft before the gloaming comes on Iâ€™ll retreat to the Locanda del Pavimento, a.k.a. sidewalk, there to sit in the open air and sip thoughtfully at some life-sustaining beverage [just now itâ€™s Kenwoodâ€™s Sonoma County Zin]. As I gaze toward the lordly Hudson and the

Snooki Monument beyond, far off toward where the River Phoenix flows gently through Rudy Vallee toward the limpid waters of Turhan Bay, I compose my mind in peace for a backward glance at recent news of note. Â¶ For example, Tom Wark, indefatigable warrior for the consumerâ€™s right to buy wine unhampered by politicos, has opened a new front in his long war: heâ€™s now executive director of the American Wine Consumer Coalition [which I like to call the CAB, for Campaign Against Backwardness]. What gets Warkâ€™s goat and mine too is that 11 states absolutely forbid out-of-state shipments to consumers;  36 ban shipments from out-of-state retailers; 17 nix wine sales in grocery stores; 4 forbid Sunday sales; and 15 donâ€™t allow BYO in restaurants. And Pennsylvania and Utah still tyrannize consumers via their state monopolies. [See Wineconsumers.org for more on how and how often politicians abuse the public to protect their campaign contributions.] Â¶ Speaking of backwardness, Doug and Linda Pendleton deal with it daily as owners of Indianaâ€™s well-regarded Grapevine Cottage. They have two outlets in Zionsville, which holds the gorgeous east in fee, or would if it could, but it canâ€™t. The Pendletons are forbidden to ship out of state–and even in state. Canâ€™t ship, period. But thatâ€™s beside the point. Recently, Doug and Linda did

what a lot of people have thought of doing but never got round to: staging a wine-saving face-off between Vacu Vin and Private Preserve. They poured two glasses each out of two bottles and set them aside for re-tasting after 48 hours. They did the same with a third bottle, which they gave the traditional re-cork-and-refrigerate therapy. The wine was Columbia Crestâ€™s Grand Estate Merlot, which Doug and Linda chose for its â€˜remarkable consistencyâ€™. The results? The re-corked bottle had to be poured right down the drain. Private Preserveâ€™s blanket of inert gas got a â€˜preservation scoreâ€™ of 65-70%: after a little swirling, the wine was â€˜still very enjoyable.â€™ Vacu Vinâ€™s wine won hands-down [75-80%]: the tannins were still firm, Doug reports, and the nose almost indistinguishable from that of the fresh bottle. Â¶ My own experience validates the Vacu Vin, and Iâ€™ll say that claims of its â€˜sucking the life out of wineâ€™ aremere wine-snob voodoo. Just pump until you feel resistance and you and your wine will be fine. [Over-pumping will damage wine: if you see bubbles as you pump, the wine is actually boiling.]

Iâ€™ve never cared for Private Preserve. Irrationally because my first can was thrown out by the char lady, who thought it was empty. I could hardly blame her: full or empty, the can weighs the same to any scale short of a nanomechanical mass sensor. Rationally because, as my locapour neighbor Art Vindepays says, â€˜It gives me no feedback, no way to be certain that Iâ€™ve used it properly. You get a hiss when you spray, but nothing you can see. And what if I move the bottleâ€”will that disturb the gas?â€™ Â¶  If, Thirsty Reader, you are inclined to experiment for yourself, youâ€™ll find that scientific inquiry has never been cheaper. Online, the spray goes for a low of $8.42 and the basic Vacu Vin bottoms out at $5.94. Similar pumps by Jokari and Fox Run are even cheaper. Â¶ Dr. Jekyll and Nauga Hyde, bipolar specialists in rec-room decor, dropped by to crow that New York judges had again told Nanny/Mayor Michael Bloomberg to piss off and take his soda ban with him. Hizzonor, you may recall, was upset by the king-size drinks sold in movie houses and restaurants. In March, judges shot his imperious ban down as unconstitutional, arbitrary and capricious, so he appealed. Now heâ€™s lost again. He noted, a little huffily, that more than 2000 New Yorkers have died of diabetes in the interim but didnâ€™t say how many of them had actually been to the movies. Â¶ Stop press! The ComitÃ© Interprofessionel du Vin de Champagne mounted its high horse in response to rumors of new Champagne-colored iPhones. And hinted at legal action! Risible as it may seem, the CIVC has â€˜protectedâ€™ Champagne in Europe, quashing an Yves St. Laurent perfume and a Swedish yogurt, but in the U.S. theyâ€™ll have to put a cork in their complaint: the name is not so rigorously restricted here, as witness among other things Korbel California Champagne and Lawrence Welkâ€™s Champagne Music Makers, to say nothing of Alice Lon. â€˜We canâ€™t say that a Champagne color exists,â€™ the CIVCâ€™s legal explained. The CIVC, I imagine,will be to start legal

action against Toyota for its Champagne-colored Camrys, Home Depot for its house paint and various makers of makeup and hair colorings. Not to mention Pantone, global color arbiter to artists, designers, manufacturers and retailers, which confidently lists Champagne Beige and Pink Champagne on its palette: Nos. 14-1012 and 12-1107. [You could look â€˜em up.] And then, egg on face to the CIVC, the color turned out to be gold. Â¶ Our Laconic Lexicon defines BOYCOTT as a â€˜fashionable means of expressing moral indignation, appearing virtuous and accomplishing nothing, all at one go.â€™ Itâ€™s relevant here because of the simple-minded boycott of Stoli vodka to protest Russiaâ€™s anti-gay law, which Putin put in.  Save your dudgeon and stow your dander; you might as well boycott all Russian dressings, Russian River Pinot Noir and the Russian Tea Room, because they, too, like Stoli, are not Russian. Stoli is distilled in Latvia and the company has sponsored gay-themed events here. Moreover, even a boycott of all real Russian vodkas, such as Kauffman, Russian Standard and [cleverness alert!] Fukoff, would cost the Russian economy a paltry $59 million. So lose the halos, kids. Â¶ OK, so itâ€™s no â€˜Inverted Jennyâ€™ but itâ€™s a bungle nonetheless: a flea-market sortie unearthed a not-rare example of  the â€˜Prohibition Enforcedâ€™ commemorative stamp issued by the post office in 1998. The image shows three men dumping a barrel of wine into a sewer in aid of National Sobriety. Never mind that home-made wine was legal during Prohibition, as was the â€˜altar wineâ€™ made for Catholics and â€˜sacramental wineâ€™ for Jews. Georges de Latour and Louis Martini made such tsunamic quantities of the stuff a fellow might have thought 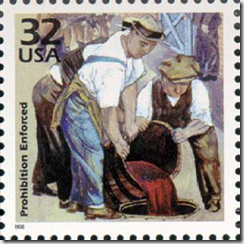 the Noble Experiment signified Americaâ€™s vast spiritual reawakening. But Eliot Ness and his boys ignored wine, as did Al Capone and his:  the big bucks were in beer and whiskey. Yet mayhap, Thirsty Reader, you are too young to know of all that, even as I, sad to say, am not. Cheers!
Â©2013 Bill Marsano