Whatâ€™s the intersection at which wine and spirits meet cupcakes and Kinder Eggs, Buckyball magnets and Mayor Bloombergâ€™s Tit Squad? Read on.

If You Know Whatâ€™s Good for You! is a favorite maternal warning, and it just wonâ€™t go away. â€˜Iâ€™m all grown up now,â€™ says Thirsty Reader, â€˜as are youâ€”able to drink, smoke, vote and die for our countryâ€”but itâ€™s the ruling dogma of the Busybody Brigade.â€™

Of which Michael Bloomberg is chief. The imperial and imperious mayor-proconsul is busy making New York the City of Big Brotherly Love. He dotes on telling citizens what to eat and what to drink, what to do and what to think; does so every chance he gets; never lets the law stand in his way*. Food too salty? Behold Hizzonerâ€™s war on salt. Trans-fats bad? Banned, just like that.

New Yorkers for Beverage Choices seeks to rally those who ingest mass quantities with a website opposing Mayor Mikeâ€™s latest bid to control the consumption habits of Gothamâ€™s citizens: nycbeveragechoices.com is the place to go. And 24 oz. is, for some, the way to go.

Now? Supersized sodas. Really. Bake sales have managed thus far to escape the mayorâ€™s regulatory gaze, but the Urge to Control is a strong one. Banners have come down hard on cupcake-hustling mothers in such places as New Mexico, California, Colorado, Hawaii, Mississippi, Nevada and Texas. Reigning Food-and-Nutrition VoPo Marla Caplon, who is gauleiter of the Sâ€™mores Police in Marylandâ€™s Montgomery County, replies on zealous spies and snitches to stop the snack-pushers: â€˜If a bake sale is going on,â€™ quoth she, â€˜itâ€™s reported to Administration and itâ€™s taken care of.â€™ I love that taken care of, donâ€™t you? Will Caplon call Major Toht [below] out of retirement to round up the nationâ€™s 7.5 million cookie-flogging Girl Scouts? 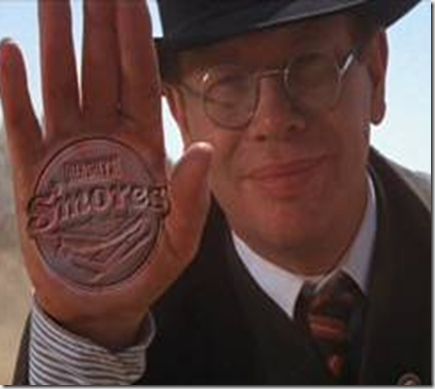 Itâ€™s easy to make mock here, even an obligation, for bans and banners are part of the Higher Nonsense. [The New Yorker quickly took the mickey out of Mike with a witty cover recalling the lurid 1950s teen movies of the â€˜Out for Kicks, In for Troubleâ€™ genre.] But in fact these zealots are dangerous folk, 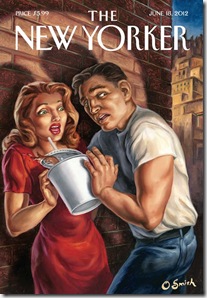 threats to freedom, even or especially when itâ€™s none of their damned business. They thrive in some surprising places. Supposedly liberal New York is actually a Nanny State bastion, so Mayor Mike gets much doltish support. â€˜It canâ€™t hurt and it might helpâ€™ was a popular, wellâ€”itâ€™s hardly an argument, merely a Wistful Sentiment, like Bonoâ€™s suggestion that we continue sending aid money to Africa despite most of itsâ€™ being stolen by dictators [â€˜Weâ€™ve got to do something, even if it doesnâ€™t workâ€™]. Others say the ban â€˜sends a powerful messageâ€™. Really? Thirsty says it simply proves the law is a ass. He agrees with Sam Goldwyn: â€˜If you want to send a message, call Western Unionâ€™. Then thereâ€™s â€˜If it saves even ONE child . . . .â€™. Sorry, folks, but your brat is not worth my civil rights. 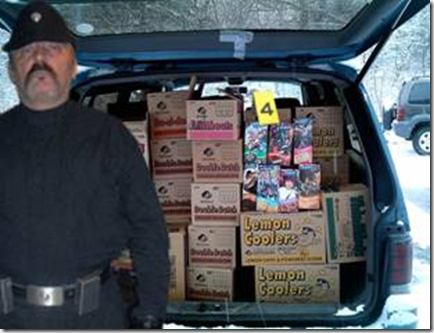 Americansâ€™ obsession with bodily health borders on mental illness. Banners know whatâ€™s good for you and for your children too, and they will compel obedience by force of law when and if they can and by public shaming and/or abusive taxation when they canâ€™t. Mayor Mikeâ€™s naive belief that he can end child obesity is his excuse for treating adults like kids. Bake-sale banners are just as zealous, and now new mothers are being shamed in print for  mammary incorrectness by the self-righteous likes of, for example, Time Magazine scribbler Bonnie Rochman. A breast-feeding zealot, she wrote â€˜[my sister-in-law]. . . Rachel knows firsthand how bleep! pushing bleep! can impact an inexperienced mother . . . bleep! offered to give her bleep! a bottle â€œto make it easier on you.â€ Exhausted and uncertain, she agreed . . . . â€œI was a new mom,â€ she said. â€œI didnâ€™t know what I was doingâ€.â€™

Rachel, Rachel! How could you? Yes, it looks badâ€”until you change the bleeps: nurses, formula, a nurse and newborn. So Rachel accepted a bottle of formula. She should throw herself off a bridge?

Rochman says Rachel had always intended to breast-feed, implying that the nurse/pusher has made that impossible. For additional humiliation Rochman spills that Rachel even underwent a C-section, thus inviting the scorn of crackpot Mommy Fanatics who say a C-section and/or a hospital birth means â€˜youâ€™re not a REAL motherâ€™. Thanks, Sis! [Aside to young marrieds out there: If youâ€™re getting your parenting advice from Time the Weekly News Pamphlet, consider looking elsewhere.] 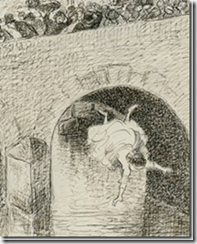 Exposed by her sister-in-law for accepting infant formula; shamed for giving birth in a hospital and even having a C-section; dreading mention of the word â€˜epiduralâ€™; Rachel takes the only way out before a crazed mob of howling Mommy Fanatics and the fortuitous documentary gaze of Camille Pissarro.

Now Mayor Mike wants hospitals to be lactically correct: to deny formula unless thereâ€™s medical need or specific requests [even then mothers are subjected to mandatory anti-formula lectures]. Formula must be locked up, like medicines and drugs. Staff will have to sign it out, track its distribution and report to the Health Department. Have I got this right? Woman wants an abortion, she gets it any time for any reason or none at all, but she canâ€™t get formula without a browbeating by Mayor Mikeâ€™s Tit Squad? â€˜Splain meâ€™, as Ricky Ricardo used to say, how this makes any sense. â€˜Splain me how itâ€™s fair, or reasonable, or any of the Dear Leaderâ€™s bloody business. 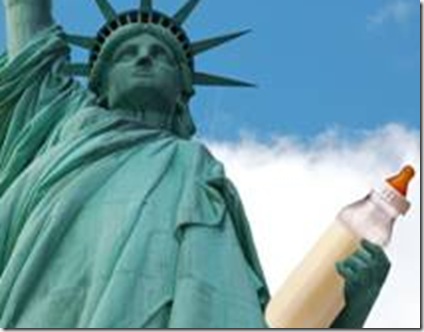 High motives do not justify stupidity. Obesity will not be conquered by banning sodas d’une certaine taille. As for formula: yes, Big Babyâ€”the mighty marketer of kiddy products ranging from â€˜smart waterâ€™ for toddlers to $700 PAVs**â€”offers the stuff free in hospitals as a greedy industrial marketing ploy. But are mothers stupid? Unable to decide for themselves? Isnâ€™t it possible that formula could â€˜empowerâ€™ Dads, as in getting them to take the 2 A.M. feeding? Worked for me.

The lunacy escalates, as you knew it would: Another new mother named Rachelâ€”Weiszâ€”dared to say an occasional glass of was wine OK after the first three months. Know-betters immediately denounced the actress as ill-informed and dangerous, despite significant disagreement [in England and Europe, for example]â€”and no proof at all that â€˜any alcohol is dangerousâ€™. Let me spell out the fall-out: Pregnant women are now being refused wine in American restaurants. Waiters, whose job is, I believe, to carry plates, now offer medical advice. And in one case, compulsion: Chicagoan Michelle Lee was ordered to leave a restaurant when all sheâ€™d ordered was pizza and water. But she was pregnant, and that, as people have finally stopped saying, tore it, so out she went. As NOW president Terry O’Neill observed â€˜[non-pregnant]people feel increasingly empowered to make decisions for pregnant womenâ€™. Ya think? Thus we await the publication of a New Age Dr. Spock written by a soon-to-be-nationally-known cocktail waiter. Baba Wawa and Katie Couric will be all over the guy in six minutes flat, and People magazine will then name him the Most Sensitive Man Alive. Now comes word of a breakthrough: actual pregnancy is no longer necessary. In Canada, a land famous for excess caution, the ink-seeking strivers of the Society of Obstetricians and Gynaecologists are now proposing abstention for women who might become pregnant.

The urge to ban has naught to do with fetal health or childhood obesity. It is showing off; it is boasting about oneâ€™s sensitivity; it seeks control. It is the fastest way of becoming a Recognized Authority and Public Expert who can attract grants, get jobs and appear on talk-shows run by jackasses. It leads to speaking engagements and book contracts, and in general coins money at the expense of science, common sense and personal freedom.

Beware, Thirsty Reader. Urged on by their limitless array of targetsâ€”raw-milk cheese, party balloons [Yeah, right, says Ruth Suehle of geekmom.com, theyâ€™re â€˜doom on a string!â€™] as well as whistles, foie gras, bake sales, Harry Potter, energy drinks, wee magnets, Kinder Eggs [60,000 seized last year by U.S. Customs], fireworks and moreâ€”banners will get around soon enough to what the WCTU called King Alcohol. They may not be so foolish as to try to bring back Prohibition, but with the glad help of the Studies Industryâ€”that unregulated confederacy of â€˜expertsâ€™ who can be paid to prove anythingâ€”theyâ€™ll seek more age restrictions, limits on individual consumption and purchase, abusive, even crippling taxation, and, prominent on every bottle, a grisly graphic warning label. After all, they know whatâ€™s good for you, and you donâ€™t.

*Mayor Mike supported New Yorkâ€™s term-limits law, which helped eliminate at least a few of Gothamâ€™s elected crooks, the idea being that two terms of thievery and incompetence should be enough to satisfy anybody. But then he thought again and, deciding that the city needed him more than it did the law, got his house pet, City Council Speaker Christine Quinn, to have the law changed.

**PAVs: Pediatric Assault Vehicles, oversized and overpriced transports that have, because of their enhanced Preening Index, replaced ordinary strollers for Yuppies wishing to impress onlookers with how devoted they are to the kids they routinely leave to the care of underpaid immigrant nannies.