Having been good-for-goodnessâ€™-sake for the whole of the Christmas-Hanukkah-Kwanzaa-Festivus season, I feel entitled to a little bad behavior on the subject of gifts.

Each year truly ridiculous gifts have been pressed upon me by members of the He Likes Wine, So Iâ€™ll Get Him a Wine Thingy crowd, who are victimized by evil retail clerks looking for quick sales and dubious if not grossly inaccurate online descriptions. OK, I play the game: I smile and say thanks; I accept them with aplomb while regarding them with qualms [or maybe itâ€™s the other way round; I keep forgetting]. But now the Time of Nice is over and Iâ€™ve held a  January Clearance of gadgets that are silly, unworkable, pretentious or all of the above; that are embarrassing to own save by that stunted generation whose role models are event planners, deejays and nightclub doormen. I invited the neighbors and threw a party. And now Iâ€™m going public.

Your correspondent opened the festivities with a gift called the Corkcicle, a plastic â€˜icicleâ€™ filled with clear gel coolant that, when frozen solid, is supposed to shoved into a bottle to maintain pre-chilled wine at serving temperature. And it does, sort of, but mostly it annoys you. First you must needs pour a couple of ounces of wine out in order to get the Corkcicle in. Then you needs must remove the thing every time you pour: itâ€™s wet and a foot long, so where do you put it? And as you pour more wine, less and less of the Corkcicle makes  contact with the remaining wineâ€”only a couple of inches when youâ€™ve reached the half-bottle level.  And, of course, three inches of the thing are in the neck of the bottle, where they do nothing at all.

The Corkcicle, which costs $20-$25, poses vexed questions. For example, why should you have to uncork the wine every time you pour? Could the gel leak into the wine? [The thing is, after all, rather lightly if not flimsily constructed.] And what is so hard about using an ice bucket? Still, an oaf at foodbeast.com was over the moon about it. â€˜Thereâ€™s been plenty of genius ways to keep wine chilled without letting watery residue dilute the taste, but is one of the most epic weâ€™ve seen in quite some time,â€™ he said subliterately. What is it that suggests heâ€™s never seen one in his life? 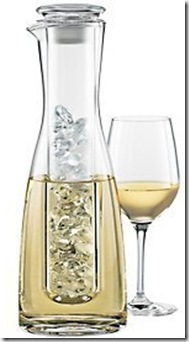 Another loser was The Wine Enthusiastâ€™s 2-piece wine-chilling carafe, contributed by Hoâ€™ Chi Minh, a long-time North Vietnamese pole-dancer who was Haiphongâ€™s â€˜Slut of the Yearâ€™ for most of the 1990s. Now legit [sheâ€™s a Girl Scout troop leader, no less!] Hoâ€™ has several beefs, noting that itâ€™s much like the Corkcicle writ large. It too works only with pre-chilled wine [it will not cool room-temp wine to serving temp] and its cooling device, a big glass tube thatâ€™s supposed to be filled with ice cubes [you smarties will add water] has to be extracted from the carafe for every pour. The tube is large, heavy and clumsy to handle, which attributes combine uneasily with fragile. The only thing I like about it is the rave review it received from Jill Martin, who reigns as  the resident Shopping Ditz of the Today Show. Artfully blending her primitive vocabulary with her shaky grasp of physics, she said that it â€˜will stop your wine-serving case from getting sweaty.â€™

Mulligan, Stu was the wrong choice to receive whiskey stones. A punctilious Hibernian librarian and renowned pedant [he once fought a duel over the mis-cataloguing of â€˜Lafcadi Oâ€™Hearnâ€™], he was enraged that â€˜my eejit cousin spent sixty bucks on a bunch of rocks when the same money would have bought three bottles of Clontarf!â€™ Or two bottles of Black Bush or one of the Redbreast 15-year-old, for that matter. But no. What he got was nine dice-sized rocks and two ineptly designed glasses.

You freeze the stones to chill your whiskey with no melting and no dilution. So far, so good. But sixty bucks for rocks? Even if they are, according to the online poetry of their numerous e-tailers, â€˜all-natural soapstones that are proudly handcrafted of soapstone by the great soapstone workers of Perkinsville, Vermont, home to some of the USAâ€™s oldest soapstone workshops.â€™ And theyâ€™re made of soapstone!

I can picture them now, those legendary artisans, strutting about the streets of Perkinsville with their chests all puffed out, or bent artisanally over their ancient and time-stained workbenches, canâ€™t you? You sure? Oh.

These things have been around for a while now. A decade ago someone seeking free ink in Hemispheres sent me the first of their kind, and so I saw them in the original dusk of their being, as it were. Made [proudly, by hand, etc.] of Scotch granite, they cost $80 for two. They came in a wee velveteen drawstring pouch inside a varnished wooden cabinet, which suggested they should be prayed over, like holy relics. Now they are no longer alone. Williams-Sonoma has the same sort of thing in stainless steel and others offer versions in marble and crystal. All are hilariously priced, considering that Jackâ€™s sells aquarium stones for 99Â¢ a sack.

Homer Nods, classical scholar and dolt, rarely gets to cock a snook at anyone, but battery-operated corkscrews are a legitimate target for what Brits used to call Queen Anneâ€™s fan. â€˜In a wordâ€™ says Homer, stu pid. Severe arthritis might be an excuse for the thing, but not for 11 brands offering at least 18 models. Thereâ€™s even a website that claims to review them, although seldom is heard a discouraging wordâ€™ from that quarter, which seems mainly interested in getting you to buy one at prices ranging from $20 to $60. Some have sleek looks and fancy doodads [built-in thermometer, â€˜calming blue indicator lights,â€™ enough might to yank 40, 60 even 80 corks]; others have cheesy looks suggestive of manufacture in Chinese prisons. In all cases, the whine of the electric motor will impart a dental tone to romantic dinners lit by electric candles.