The ineffable Pat Schneider was on the ameche the other day and saying all the right things, especially in the Three Little Words Department. From Let’s Have Lunch [always a strong lead], she doubled-down or whatever with Meet John Concannon and trumped my ace with the ever-reliable On His Card. Then she threw in Bring the Posse, just for lagniappe. Done and done, Patsy!

The Posse is my shifting and largely shiftless band of ne’er-do-wells, lowlifes and public nuisances, i.e., wine scribblers. For Pat and John’s edification and dismay a pod of us gathered at Ben & Jack’s Steak House. Zagat calls B&J ‘contenders in the Peter Luger clone wars,’ but surely means only the beef and bacon, for B&J, owned by two ex-Luger waiters, outdoes Luger’s décor and service by a country mile and a London stone.

Maître d’ Nick Velic saw us as a ravening mob, but was too suave to say so [he’d likely have preferred troupe des gloutons sauvages]. He chummed us with in-your-life bacon and a vast platter of shrimps and split lobsters while platters of sliced Porterhouse 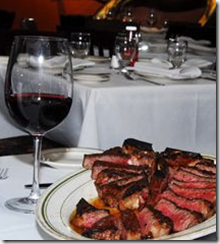 were done to glory, as was a plate of grilled salmon. With these we poured Concannon’s
new Conservancy line of varietals: Petite Sirah, Chardonnay, Cabernet Sauvignon and Merlot. To all of the above our little troupe did full justice or even a little more, the wines in particular, while our host whistled the patter.

John Concannon, known as John,* likewise said all the right things. He recognizes consumers’ value-driven values [i.e., bargain-lust] and courts the thrifty with the Conservancy line, for which his mantra is ’50-30-15,’ by which me means that from packaging to palate they look like $50 wines and taste like $30 wines but cost a mere $15.

Concannon Vineyard, which was founded by John’s great-grandfather James Concannon in 1883, is east but not far enough east of San Francisco and Oakland. Although the Livermore Valley had once been known for its fine wines, John says it has been plagued down the years by surpluses, Prohibition and that great evil, phylloxera. And so from its 50 wineries and 5000 acres of vines of the early 1900s it had shrunk to six and 1500 by the late 1960s. Then, having missed the California wine renaissance, it was left ripe for unrestricted urban expansion, a.k.a. development a.k.a. blight.

On the other hand, not so fast: far-sighted Valley residents forestalled the threat by banding together to protect the land with what is now called the Tri-Valley Conservancy, a conservation easement that fosters agriculture and walls out strip malls, big-box stores, high-rise condos, tract housing and other offenses. The Concannons are proud that theirs was the first winery to join it, and so have named the Conservancy line in its honor. [Napa’s vineyards are similarly protected, but it took some 20 years of bitter and divisive wrangling—and for some there the acrimony still lingers. See two excellent books by James Conaway: The Far Side of Eden: New Money, Old Land, and the Battle for Napa Valley and Napa: The Story of an American Eden. Both books are splendidly written, as well as occasionally and grimly funny.]

John says his ancestors were a resourceful lot. In 1865, James left Ireland at 18 and ricocheted off Maine and Oregon before putting down roots and rootstock in the Livermore Valley. His son, ‘Captain Joe,’ served under Pershing and Patton, and pulled the winery through Prohibition by making altar wine for church use. [Beaulieu’s Georges de Latour did likewise. The National Piety Index was never so high as under Prohibition.] Jim, or ‘Mr. C,’ John’s father, took over in the 1960s. 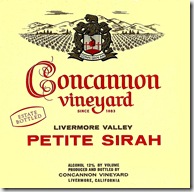 In 1964 Mr. C made history by releasing the first varietally labeled Petite Sirah [left]. John grew up at the winery but wasn’t pushed to follow his  dad. ‘He said ‘Make your own name, follow your own dreams . . . and if you think it’s right for you, come back”.’ After some 22 years in medical sales, he did.

We heard more—about developing the Concannon Clones [Cabernet 7, 8 and 11, now widely planted], the winery’s new solar array, and the renovation of the old tasting room­—before talk shifted to the Deal of the Hour: Wappo Hill may be sold for a fire-sale price. The 56-acre estate of Robert and Margrit Mondavi was put on the market in May and priced at a rarefied $25 million. Finding no takers, it will be auctioned in November for rather less. Indeed, the minimum bid is $13.9 million, or 44 percent below the asking price. The house was designed by Cliff May, who designed the Mondavi winery, which it resembles with its low-sloped roof and viewing tower. It runs to more than 11,000 square feet on three levels, sits in an oak grove atop a hill south of Yountville, and has 360-degree views, two bedrooms and a large indoor pool whose roof opens to the sky.

‘The first time I visited the place,’ Hoop said, ‘I was impressed but mystified. The place is enormous, so I asked Bob why it has only two bedrooms. He said “So the kids and grandchildren can’t stay over”.’ Hoop also recalled a failed luncheon invitation: ‘During another visit he invited me to lunch, and I had to say I had only a half hour before my next appointment. As I was leaving one of the staff came up to hand me a package. It contained a sandwich, a half-bottle of Opus One and a note that said Robert Mondavi doesn’t do half-hour lunches.’

Then there was a tasting at the winery, a legendary tasting that Hoop stopped before it was fairly begun. Mondavi was about to pour when Hoop sniffed his glass and said ‘Excuse me, but I smell soap in my glass.’ Sniffing the glass for himself, Mondavi agreed. ‘Yes, there is,’ he said. ‘But which brand?’

Legend has it that Hoop, always quick on his feet despite the cane he leans on [and which he recently used to break the nose of a would-be mugger], shot back ‘I can’t name the brand, but it’s definitely a Procter & Gamble product.’

Love What You’ve Done with Your Hair

celebrates Earth Day and, ever since 2006, has been both CEO and queen regnant of Sonoma County’s Iron Horse**. She is naturally smitten with your tottering correspondent and has flirtatiously sent this Halloween billet-doux. I now share it with you, Thirsty Reader, from largeness of soul and a desire to show off.  So pop a few corks with me, why don’t you?

Wait—that isn’t Joy. This is: 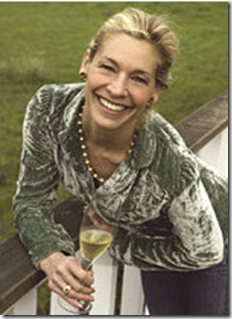 *I just threw this in as an excuse to pass along H.L. Mencken’s nifty barb: ‘A Rotarian was the first man to call John the Baptist Jack.’