There never was much money in wine writing and often thereâ€™s decidedly less in wine blogging, but blogging is worth the superhuman effort involved when its admittedly few rewards include dining at Convivio on splendid handmade pasta while the beautiful Egle Armani and the relentless Lisa Klinck-Shea fight over me. In my dreams, anyway.

Egle Capilupi Armani was presenting the wines her husband makes in the Valdadige DOC zoneâ€”the valley of the river Adige as it runs south from the region of Trentino-Alto Adige and into the Veneto, where it sweeps east to and through Verona on its way to the Adriatic south of Venice. A wall of low but steep-sloped mountains separates the river from Lake Garda, and the castles thereabouts give this stretch of countryside the name Terra dei Forti, or Land of [the] Fortresses. Itâ€™s beautiful territory. I first saw it about two decades ago when I was visiting Masiâ€™s Dottore Sandro Boscaini, [â€˜the Lion of the Venetoâ€™] and, as with most places in Italy, Iâ€™m ready to return any minute. 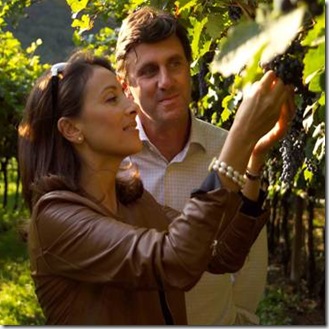 The Illyrians, who originated in Greece, planted the regionâ€™s first vines in the 7th or 6th centuries BC and the Ar-manis got in-to the act rather later, but wine is still the fam-ily business.

The current owner (and wine-maker) Albino Armani puts the year 1607 on his labels because that was the year a distant ancestor, Domenico Armani bought a parcel of land with â€˜trees and grapevines,â€™ according to a deed that is the first dated proof of Armani wine-making. There could have been earlier efforts: The land Domenico bought had been his fatherâ€™s. I mention all this only because here in our still-young republic we often have a short view of historical age, and a little perspective is useful. (Iâ€™m thinking of the advertise-ment for a trace-your-roots website in which a delighted customer crows about tracing his family back to â€˜before the Civil War!â€™)

Convivio being known for what the Brits used to call â€˜good chopâ€™, I deployed a couple of members of my posse, Al Fresco, the picnic fanatic and outdoor muralist, and Manny Frego, a devil-may-care former cantor in the ghetto of Rome. The pastas were tortelli dâ€™amatrice (wee rectangular ravioli with a sauce of tomato, guanciale [pork cheek], cheese and pepper) and malloreddus (Sardinian saffron gnochetti sauced with crab and sea urchin), and there were rustic fegatini (chicken-liver crostini with onions cooked in marsala). For these Egle unlimbered her husbandâ€™s 2009 Pinot Grigio Corvara [single-vineyard] Valdadige D.O.C. (ABV 13%, $20).

It was delightful. Not at all the sort of rinse-and-forget Pinot Grigios produced in  industrial volume in the Veneto, the Corvara owes its firm body and Durante nose (lots of

peaches in there) to vines 15 to 40 years old and the use of passito [dried] grapes. Much depends on the weather each yearâ€”the percentage (10-20) of the passito grapes used and the manner of drying them. Theyâ€™re stemmed on the vine and left hanging in fine weather; when humidity threatens theyâ€™re laid out in plastic flats and stacked  indoors in the attic-like ventilated drying rooms that are known as frutai.

Foja Tonda or Round Leaf is the dialect name of a grape that is only marginally better known as Casetta [Italy has these mystery varieties by the long ton]. This is not the Foglia Tonda found in Tuscany but, says Egle, a variety indigenous to the Adige Valley and cultivated since ancient times until the locals, fed up with its stingy yields, abandoned it. It was Albino who rescued it from extinction.

The 2007â€”from the first year of D.O.C. status–was pleasing but Al thought it a little shy,  wanting a little more time to develop. The 2006â€”from the last year of

I.G.T.â€”provided what Manny called â€˜a happy glassful indeed.â€™ The â€™05, on the other hand, was pretty much other-planetary, a truly delicious wine that we all kept going back too, even through dessert and coffee, and the little ceremony known to wine scribblers as Someone Else Getting the Check.

And then it was all overâ€”Paradise lost! The bottles werfe empty. Egle and La Klinck-Shea ceased fighting over me; indeed, they declared peace and promised to devote themselves to more constructive activities. I could swear that at least one of them mentioned shopping.

Convivio is at 45 Tudor City Place, basically 100 feet west of First Ave. and one flight up from 42nd St. The food, dÃ©cor and atmosphere were fine and the service excellent. And tolerant: No one called Security, even when we got a little jolly.