Blow the Flutes—and Free the Bubbles

About two years ago I was at Del Posto for a dinner and champagne-tasting given by top chien Ghislain de Montgolfier, who is PrÃ©sident du Conseil de Surveillance de Champagne Bollinger, PrÃ©sident de l’Union des Maisons de Champagne et co-PrÃ©sident du CIVC. And descended, if that’s the word, from the 18th Century balloonists who pioneered manned flight. For so notable a personage I managed for once to be on time–early, in fact. Parked at the bar I noticed a distinguished silvery gent discussing stemware with the sommelier. 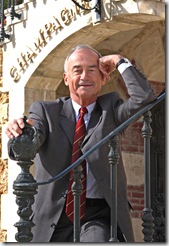 The silvery gent turned out to be Montgolfier himself and he quickly chose a Pinot Noir glass. So it would be champagne before dinner and Pinot with? Pinot from the 50-year-old vines behind Montgolfier’s office? Nah.

The upshot was actually better: We would drink champagne from BIG glasses! Just as I’ve always done, but in cowardly secret. It was a validaceous moment for your correspondent. The thrill was–how shall I say it?–more than a frisson but less than a crise. Something between "Do you hear the guns, Fernando?" and George Costanza’s immortal "The sea was angry that day, my friends!"

The fact is I hate wee wineglasses. I denigrate them; I laugh them to scorn. I quote the Italian poet Guglielmo di Genova to devastating effect:

Yes: All wines are unhappy imprisoned in small glasses.

Most folks believe champagne must be drunk from flutes lest a pedantic Frenchy pop out from behind a potted palm or customer and make them put their hands in the de-stemmer. It is one of the unacknowledged hazards of restaurant dining.

At home I do as I wish. I break out the Riedel Burgundy Grand Cru.

Almost 10 inches tall, the RBGC–or Winston Churchill or Pokal Hoch [Tall Goblet]–is a mouth-blown pulled-stem lead-crystal monument to craftsmanship and hedonism. Designed by Claus Josef Riedel and introduced in 1958 as the first wine-specific stem, it stands alone in the Museum of Modern Art’s permanent collection.

The Duchess of Windsor fell for it like a lodgepole pine and simply had to have a bunch of them some right pronto. Claus Josef delivered them personally, in those dark pre-FedEx days, by car. From Austria.The RBGC glorifies anything put into it or drunk from it, 37 ounces at a time, if you insist or dare (4 to 8 is best).  Rapped briskly with a knuckle, it makes a joyful noise–Gonn-n-n-g-g-g-g!–that lingers about 15 seconds. Pity it costs like hell: $105 from riedel.com and $122 (!!!) if

you are fool enough to consult williams-sonoma.com. (Online I saw it at tableandhome.com for $78. Temporarily out of stock, though. No wonder.)

Post-Montgolfier I was re-validated by Riedel himself. Or themselves: Georg and his son, Max, who brought their stemware unto the 11th generation, also brought it to The Modern, restaurant genius Danny Meyer’s coolly elegant MoMA outpost. At a private dinner there die zwei Riedel not only served champagne in Pinot Noir glasses (Vinum XLs) but poured it from decanters–the Amadeo model (I checked).

Later, at an uptown lunch, Cinzano introduced its crisp new prosecco. The sommelier didn’t blink when I asked for real glasses instead of flutes, and the Cinzanians went along (OK, maybe just to be nice). But then came the Italian Trade Commission’s Moscato d’Asti tasting. Del Posto provided flutes–of necessity, no doubt: There were 50-odd guests at wee-tiny tables and a dozen wines each to taste.

Still. Although by nature shy and retiring, as everyone knows, I rose to denounce the flute and inform the stunned multitude that Moscato d’Asti requires and deserves the Italian coppa or some similarly generous goblet. The producers present loudly agreed, and they weren’t just being nice: Moscato d’Asti’s fragrance is legendary, and a flute will kill it.

And now even some of those tiresome, flute-flogging champagne producers are catching on. Proof: The peerless Christina Clum has just booked RÃ©gis Camus of Heidsieck (Charles and Piper both) to lead a seminar on glasses and decanters for champagne. Rumor has it the dashing Max Riedel will be there.

Me, ahead of the curve. Imagine that.