Something to Be Thankful For

The upcoming royal wedding not enough to take your mind off the economy? Maybe you suspect it was a put-up job by Obama as a distraction? Maybe you just canâ€™t look because sheâ€™s wearing Diâ€™s old ring? (Is that some kind of warning? Who thought of that?) Never mindâ€”sale prices work every time. 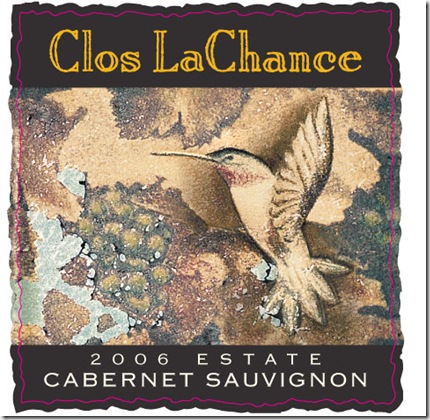 And just in time,  too, Clos LaChance Winery of San Mar-tin, Cal. is unloading its Cabernets at fire-sale prices. Quantities are limited, or so they say. In fact, thatâ€™s what everybody says about every sale. On the other hand, at these prices the smart money wonâ€™t be dragging its feet. The Hummingbird Central Coast cabs are now on offer for $5 a bottle (72% off the $18 retail price), the Estate Cabernet is only $10 (70% off $35 retail) and the Special Select Series Cabernet is but $15 (60% off $40 retail). Such prices call for case purchases, and letâ€™s hope they represent generosity rather than desperation. 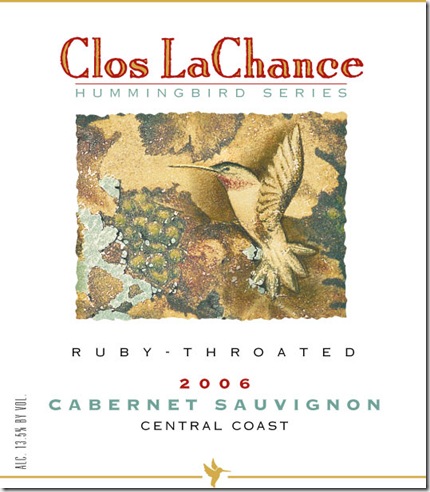 In any event they are guaranteed to delight the glad consumer; â€œMore!â€ was the encouraging if monosyl-labic response of Thirsty Reader, who notes that free with every bottle you get a lovely printâ€”suitable for framing, if you have especially small fingersâ€”of a hummingbird on the label. That turns out to be Not Strictly Accurate, which happens to be our friend Thirstyâ€™s middle name. The Special Select Cabernet has a skimpy little bit of a label with no ornithlogi-cal decoration on it at all. Well, you canâ€™t have eve-rything, can you? For example, state legislators suf-ficiently independent of the mighty and incredibly well financed Three-Tier Lobby to pass laws allow-ing direct-to-consumer sales. Citizens so blessed as to be living in the less backward states of our Re-public can order online (closlachance.com/wines) or by phone (408 686 1050).

Pennsylvaniaâ€™s Liquor Control Board has installed experimental vending machines in a Wegmans store in Mechanicsburg and a Giant in Harrisburg, and could approve nearly 100 more this year.

Created at Prohibitionâ€™s end, the LCB was intended by then-Gov. Gifford Pinchot to â€˜discourage the purchase of alcoholic beverages by making it as inconvenient and expensive as possible.â€™ Credit Pinchot with a resounding success. The LCB offers legendary inconvenience, and prices? Donâ€™t ask me. Ask the geographically privileged Pennsylvanians
filling trunks at loading docks in Jersey and D.C.

Thus the machines, which the LCB calls kiosks, are a consumer-friendly surprise, even shock.

The machine scans your driverâ€™s license, passport or military ID to confirm legal age; if has a face-recognition feature, too. Then it asks are you blotto? Even a little? If its breathalyzer reads below .02, cheers! Swipe a credit card and pay the same price as in a state store. (The LCB says a â€˜convenience surchargeâ€™ may be added some day. Why are you looking so surprised?)

Unlike the hair-tearing lunacy of LCB stores, whose operating hours seem to be all different all the time, the machines are consistent: 9AM-9PM Mon.-Sat., and some may eventually operate Sundays, too. Saints preserve us.

Problem? A HELP button connects you, live, to sentient carbon-based lifeformsâ€”actual human beings. Say the breathalyzer bounces you: LCB Press Secretary Stacy Witalec says a state employee might then ask whether youâ€™ve just rinsed with Listerine. If so, heâ€™ll suggest trying again in 20 or 30 minutes. Turn-downs can easily occur because of the zero-tolerance .02 standard (PAâ€™s DUI standard is .08). Jeez Louise! You could hit .02 after one beer, glass of wine or shot of whiskey. Or passing within a hundred yards of Lindsay Lohan.

Vending machines could also sell canned wine, were there enough to sell. In 1999 Francis Coppola introduced a sparkler named for his daughter Sofia, first in standard bottles, later in splits (straws attached), for casual sipping. Pommery Pop, Perrier-JouÃ«t, Korbel, Piper-Heidsieck, Nicolas Feuillatte and others offered splits too, but in wee bottles. Sofiaâ€™s splits were actually in cans, which added a nice dose of publicity and shock value while expanding sales opportunities to poolside parties and other no-glass zones.

Still, consumers havenâ€™t fallen like lodgepole pines for cans. Which are hardly new: Allan Green, owner-winemaker of Mendocino Countyâ€™s Greenwood Ridge Vineyards, has collected hundreds of them. Some (e.g. those for the recent Aussie Wines brand) are new. One oldie recalls the Cold Duck Era or Dark Ages of American wine-drinking. Especially notable are the cone-top cans for Mother Goldsteinâ€™s â€˜sacra-mental [kosher] wine,â€™ a Prohibition favorite. 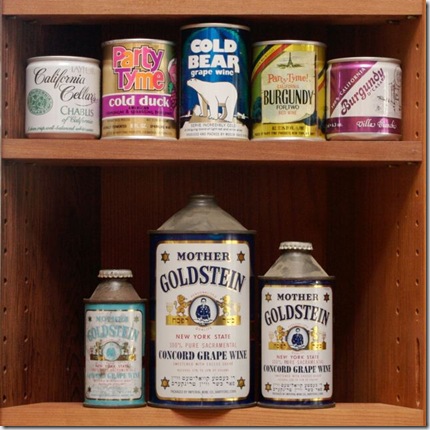 You doubted my word on canned Cold Duck? On Mother Goldsteinâ€™s, too? This photographic proof comes courtesy of Greenwood Ridgeâ€™s Al- lan Green, who is a prince. A prince, I tell you.

The French Army of World War I was an entrenched can fan, so to speak. (As for World War II, Iâ€™m not sure. Did the French fight in that war?) Its poilus or G.I. Joes received rations of canned wine, rough-and-ready red (pinard) and white (vin blanc). Theyâ€™re still with us, in a way: Iâ€™m told that British Tommies who were lubricated by generous French pals combined the words, and maybe even the wines, resulting in plonk. (It wouldnâ€™t have been the first time for outre blends: Queen Victoria dosed her claret with malt whiskey.) At least the cans meant that no plonk was ever refused for being corked. 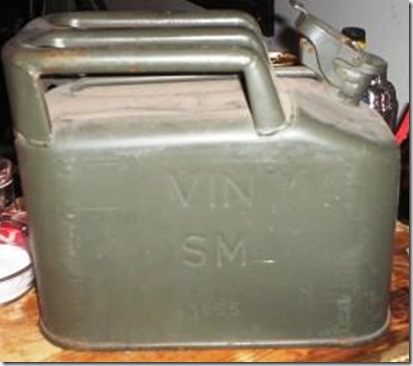 Ã€ votre santÃ© by the liter: A French Army wine can, drab in color with a decidedly dusty robe. Photo from John and Beth, thedonovan.com|

Never mind wine. Mark Kirkland, president of Mark One Foods in Salt Lake City, is pushing his sandwich-in-a-can ideaâ€”the Candwich. His main problem is that he canâ€™t catch a break. Does anyone acknowledge that his canned PB&Js offer both traditional grape and far-out strawberry? Give his BBQ Chicken Candwich a respectful nod? Applaud their shelf life, which he calls â€˜excellentâ€™? No sir. About the only ink heâ€™s got thus far connects him unfortunately and innocently with an accused scam artist name of Travis L. Wright.

Wrightâ€™s wrong was to take $145 million from 175 or so investors and sink it not into real estate for a promised 24% return but in internet wristwatch sales, rose-petal greeting cards andâ€”the Candwich. The deals seemed unduly fragrant, and in July the SEC, awakened from its dream of peace (i.e., decades of Rip Van Winkling past Bernie Madoff), filed a complaint. You can see their thinking, no? â€œWright stole $145 million and owns a stuffed wildebeest. Madoff stole $68 billion but is our friend. GET WRIGHT!â€ Clearly the SEC has priorities.

So get this: Kirkland, entrepreneur and gourmet visionary, is beavering toward his destiny, seeking funding in complete innocence and honesty, when one day he wakes up to find his name connected with the dread phrase â€˜film at 11.â€™

And the investors are branded as low-wattage types. NaÃ¯fs. Dolts. Blockheads. Or as one reporter delicately put it, â€˜Utah has long endured a reputation as a place where many people are naÃ¯ve or trusting to the point of losing their shirts.â€™ Less politely, Fools–fools in the Chief, in the Chevron and in the Quarter Fess. Indeed, Utahâ€™s Division of Securities says scammers who some years ago promised $50 million payouts on $5000 investments recruited Utah investors not with gala dinners or fancy offices full of luxe furniture on one-week rentals but by sticking flyers on car windshields. Most of the money wound up in some Third Worldish country that begins with L and ends with a. (How many can you name?)

Nevertheless, as Kate Hepburn once said, Kirkland perseveres. He told me that he hopes to have the Candwich before an adoring public in a year. I wish him luck and you should too. The Candwich is an ornament of American inventiveness, like cheese-flavored dogfood and salad-in-a-cup. Besides: the beauty part, says my neighbor Basil Coulis, the grand dam builder and pastry chef, â€˜is that itâ€™s both sandwich-in-a-can and not sandwich-in-a-can. A paradox. A contradiction in tin.â€™ Exactly! Each Candwich contains sandwich makings. The PB&J provides individual bags containing a baked, bun-like object plus two squeezer bags, one of PB, one of J. And for lagniappe thereâ€™s dessert–the Candy Surprise Inside promised on the label. Spoiler alert: itâ€™s a piece of NestlÃ© Laffy Taffy like the one pictured, which is made with genuine artificial banana-like flavoring. End spoiler alert. 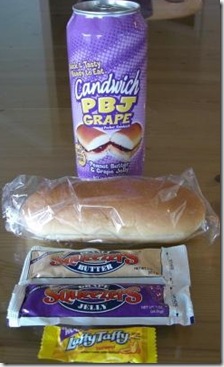 So hereâ€™s
my apocalyptic vision: Kirkland + LCB + saltines + cheese = Canape Candwiches. Yes. One day youâ€™ll go off to an LCB vending
machine and buy yourself a bottle or two of the Lumberyard Chardonnay, which has so much wood in it you could use it to kill vampires.

Then youâ€™ll press the HELP button and ask the omniscient LCB staffer â€™Which canned canape will pair best, do you think, the brie or the camembert?â€™ and receive the reply â€˜Bor-r-r-r-inggggg! Either will do, but who cares? Ordinarily Iâ€™d recommend Adelegger from Baden-WÃ¼rttemberg or Swiss Tomme Vaudoise, but youâ€™re such a pussy.â€™