Historically, no one is half so good at clobbering the French as the French themselves. Only recall the Terror and the Paris Communeâ€”or the current pummeling of and in the wine sector.

France is beset by an outbreak of Puritanism, of all things. Health loons want the government to treat wine treated as if it were a drug and ban all wine advertising. In a show of strength, the loons sued a publication that had published a wine review, charging that it thus had encouraged drinkingâ€”and they won, too. The National Cancer Institute last year advised teetotal abstinence, saying even very moderate consumption greatly increases the risk of cancer–for some types, by up to 168%. (The High Council for Public Health later officially rejected that recommendation.)

Meanwhile, Franceâ€™s wine industry is in CTD Modeâ€”as in Circling the Drain. Exports are down 30% over the past 30 years. Domestic consumption is plummeting, especially among the young, and some of the elders who still drink wine are buying imports. That raises the hackles of the CRAV (ComitÃ© RÃ©gional d’Action Viticole), a league of vinterrorists as elusive as the Scarlet Pimpernel and just as shadowy, too. (But not overly so, though: they are on Facebook.)

CRAV members are free with their fists and explosives both. They dynamite stores, vandalize rail lines, intimidate shopkeepers, and burn vehicles and warehouses. And by the time les flics arrive theyâ€™re gone, safe on the far side of the Gadroon border. (When the cops are in time, they donâ€™t actually do anything except watch, as they are unwilling to interfere with what they call â€˜social protest.â€™) CRAVâ€™s â€˜protestsâ€™ emphasize their demand that Sarkozy save their hides. They want subsidies and price hikes. They want high tariffs that will bully their fellow citoyens into buying French instead of foreign. And if they donâ€™t get the relief they want? The CRAV does not shrink from saying that there may be bloodâ€”and if so, that it will be the government that is to blame. Naturellement: to the nanny-state mind, government relief at someone elseâ€™s expense is always the answer. 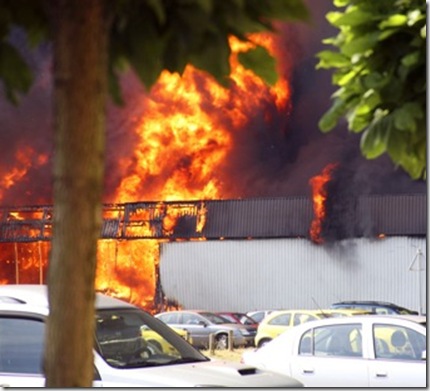 A CRAV house-warming in the south of  France: the Tea Party was never like this.

GUESS THEY NEVER HEARD OF
[yellowtail]

And now like a coup de foudre (bolt from the blue) comes the heresy of ValÃ©rie Pajotin, top cork of Anivin, France’s new international marketing arm. Export success, she advises/warns the vignerons, means wine must be made like Coca-Cola. And soon, too. What she means is that itâ€™ll have to be a] an industrial product and b] a crowd-pleaser. In short, enough already with the art of wine-making; with the sanctity of terroir; with the magic of the cellar; with the old attitude â€˜We make wine as we wish and youâ€™re lucky if we let you buy anyâ€™. Pajotin was clear: To offset spiraling decline at home and abroad, get off ton keisters and make the kind of wine the customers want.

The elite producersâ€”makers of the famous and legendary wines we love so well and canâ€™t affordâ€”will be immune of course, as will probably most of the mid-price crowd. Theyâ€™re not the ones who canâ€™t shift their goods. But the many who make low-priced stuff that people arenâ€™t buying any moreâ€”and there are thousands of themâ€”will be urged, persuaded, encouraged (and some fear forced) to sell their grapes to gigantic wine factories. The factories will then bung them together indiscriminately and produce tsunamic quantities of market-friendly wines priced to delight the glad consumer.

Vindustrial wines, in short, is what theyâ€™ll be. Theyâ€™ll feature varietal labeling, consistent quality and value for money. Nothing fancy, nothing schmancy. Adieu, chÃ¢teau names (probably including most of the 50+ that contain the name Figeac); appellations likewise. Instead, under the Vin de France umbrella (itself a replacement for Vin de Table), there are to be just a few readily recognized standard brands. Some will be blends from a single regionâ€”but a very large one, not some 500-cases-a-year plot beloved of those in the know. Others will blend fruit from all over France. â€˜Assembling wines in this way ensures a consistency of quality which will retain consumer loyalty by offering a constant taste from 1 January to 31 December,â€™ Ms Pajotin said. â€˜It is what happens with consumer brands, such as Coca-Cola.â€™

This is un coup en traÃ®tre or stab in the back, some say; they decry the â€˜dumbing downâ€™ and even destruction of the AOC system. On the other hand, the legitimacy of not a few appellations is open to doubt. (Recently six on Bordeauxâ€™s Right Bank applied for a new shared appellation that would make it easier to sell their wine. As one member explained, â€˜we all make basically the same wine.â€™ So what were those six appellations all about?)

â€˜An end to AOC?â€™ says â€˜Stretchâ€™ LÃ©otard, the noted ballet dancer and knuckleball artist. â€˜Tant pis! No one even knows how many appellations there are, and yet they are always making new ones, like Bordeaux Premier Cru and Reconnaissance de Cru Bourgeois. They have resuscitated the old Cru Artisans and are about to give new names to four old ones. I wonder will it affect the prices, donâ€™t you?â€™

Despite the howls, it looks as if Anivin will get its way. French governments are past masters of bureaucratic bullying. The only time they come up short is when the opposition includes labor unions.

Just as well, says my friend and stevedore Gros Tonnage, the rotund and orotund King of the Marseilles Piers: â€˜Here in France, the idea of pleasing the customer is a novelty at the best of times and anathema the rest, so quite a few producers are going to get what les rosbifs call the â€œshort, sharp shock.â€ It will do them good. Since it took them this long to recognize Coca-Cola, I canâ€™t wait till they discover Deux-Buck Chuck.â€™

Maybe it will all come down to this: