A lot can happen in 20 years. Rip Van Winkle awoke still loyal to King George III because heâ€™d dozed through the American Revolution. Consumers lately have been awaking to Spainâ€™s revolution: 20 years ago a few had heard of the two marquÃ©sâ€”old standby MarquÃ©s de Riscal and newborn innovator MarquÃ©s de CÃ¡ceres, and few other names. Even the stalwart Yago Santâ€™Gria, once the favorite of the college crowd, had been elbowed aside by Riunite Lambrusco. Things are different now. As a late-bloomer in modern wine-making, Spain has benefitted from the (expensive and sometimes harrowing) pioneering of others, and these days she makes a much bigger splash than formerly. 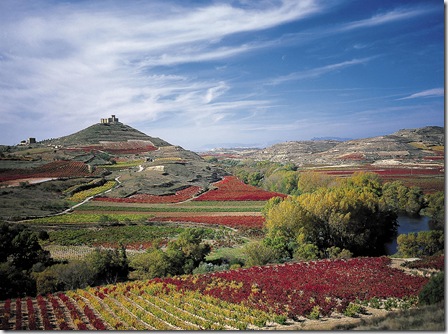 Fortuitously, thatâ€™s partly because of the current economy. Late-bloomers may benefit from the pioneersâ€™ R&D, but risk losing in the market, where they often find the shelves occupied by smug pioneers preening themselves on their foresight. Not this time. Value sells in the best of times, and in the current economy almost everyoneâ€™s looking hard at the price-quality equation. And, says Rioja ambassadress Ana Fabiano, â€œtheyâ€™re impressed by Riojaâ€™s value proposition.â€ Which is considerable. Nearly 300 bottlings were presented at a recent tasting in Manhattanâ€™s Puck Building, and although there was an adequate supply $50, $75 and $100+ bottles for those who have more money than Warren Buffett put together, more than a third of the total will retail at about $12, often less.

My venerable colleague Don Cojones, a latter-day Spanish knight and tilter at wind turbines, says thatâ€™s expected with ViÃ±a Herminiaâ€™s or Valdeguineaâ€™s 2008, or Primiciaâ€™s 2009 (all 100% Tempranillo)â€”theyâ€™re in the joven category, made-this-year-sold the next. Still, there were others comfortably in the same price range that had some bottle-age behind them: from Diez-Caballero, Clisos, Banda, Torres, BordÃ³n, RamÃ³n Bilbao, Faustino, Beronia, Solar de Randez, Noemus, AntaÃ±o, Solnia, AÃ±ares, Navajas, Promesa, Lacuesta, Age Siglo and others. The same obtained for whites, mostly made from the Viura grape (a.k.a. Macabeo), and some rosados, too. In short, we paupers do not suffer.

Not to say they stop there. most of the Rioja producers above go on and up from â€œvalue winesâ€ to fancier and pricier stuff, in the same realm as Roda, Eguren, Paganos la Nieta, Vivanco, et al.

Riojas traditionally and tyypically have been about 70% Tempranillo with the remainder Garnacha, Graciano and Mazuelo, but thereâ€™s been a move to 100% Tempranillo. At this event 100-percenters outnumbered the blends 137 to 92, and more than a third of the blends were 90% Tempranillo or more. This is reminiscent of Chianti Classico producers who in recent years have steadily reduced the percentage of blending grapes, native or international, in order to concentrate on their native star, Sangiovese. Indeed,one of the blendsâ€”a 2004 Castillo de Sajazarra Reserva took its Tempranillo to 98%, with the risible remainder being Graciano.

Jake Zeitlin, a rare-book dealer from the last century, used to advertise â€œCastles in Spain Free with Every Purchase.â€ My neighbor Doble de Luce, a failed actor and brother of Traje de Luce, a multiply gored bullfighter, says Spanish wine producers ought beg, borrow or steal that slogan.

In La Rioja as in Napa, Winery Architecture with a Capital A 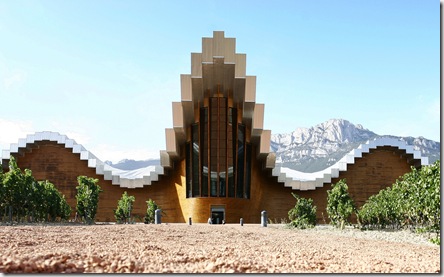 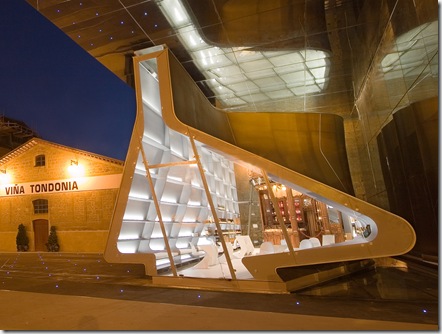 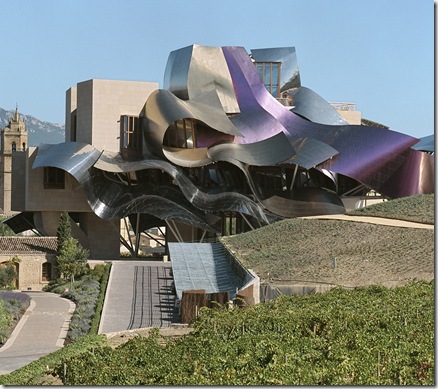 MarquÃ©s de Riscal â€˜s dramatic new winery in Elciego looks like the wrapping the Bilbao Guggenheim came in. Both were designed by Frank Gehry.