Tsunamic volumes of prattle about being close to the earth, moving to seasonal rhythms and â€˜stewardshipâ€™ make it easy to forget that the wine business isnâ€™t exactly green. Surely youâ€™ve cocked an eyebrow at the latest release proclaiming that ChÃ¢teau Rancho de la Castello has becomeâ€”bang! like thatâ€”carbon-neutral overnight. Am I a cynic to feel that sustainable often means what we can get away with? If so, Iâ€™m not alone. In The Gray Market Report of 4/21/10 (which see*), W. Blake Gray, having plowed, tunneled and bored through the 227 points of the program of California Sustainable Winegrowing Alliance, calls the whole thing â€˜Dr. Evil-designed greenwashing.â€™

The CSWAâ€™s official rectangular halo, awarded for virtue and greenishness in the face of not-very-long odds.

It is meant, he says, to be tedious and complicated enough to discourage anyone from actually reading it (kind of like the 2500-page health-care bill no one read) and focus attention instead on wineries that have been awarded the seal of virtue. â€˜The idea,â€™ Gray says, â€˜was that consumers would see this logoâ€™â€”and explore no further, just buy the wine and consider the earth saved once again. You go, Gaia!

Gray did read the whole thing, and he says about two-thirds of the Programâ€™s 227 desiderata (most subdivided into four â€˜categoriesâ€™ or levels of effort) are all-too-easily satisfied, being unnecessary, redundant, mere â€˜touchy-feely happy talkâ€™ or as Henry Ford used to say, irrevelant. The seal is apparently not so much earned as handed out. Like the Energy Star program, it appears to be about feeling good rather than doing good. And from the bureaucratsâ€™ standpoint, why ever not? The more honors awarded, the more noise made, the greater the impression of progress and the excuse for self-regard.

Tanti anni fa, as Italians say, I was at CondÃ© Nast Traveler when a Nast-wide earth-saving effort was announced. All sorts of trash was distributed to each and every employee: documents, stickers, hortatory brochures, even slogan-bearing ballpoints and coffee mugs. Then we resumed our wasteful ways. I snickered and was promptly shushed: â€˜Donâ€™t be so negative. At least weâ€™re making an effort!â€™ Which neatly parallels Bonoâ€™s response when told that massive financial aid to Africa just doesnâ€™t work, except for the dictators who steal all the money: Weâ€™ve got to do something whether it works or not!

Never mind. Some people are making serious efforts, and so, herein and henceforth, your correspondent will recognize those who have convinced him that theyâ€™re doing good, not just doing well.

Leading off is Whole Foods, whether I like it or notâ€”and I donâ€™t. In midtown Manhattan, at least, Whole Foods always suggests to grumpy me some kind of weird NPR diorama full of same-aged people exuding a hipper, cooler, greener-than-thou affect. Maybe itâ€™s because I seldom see black or brown people there except behind counters, registers or handcarts. Maybe itâ€™s because the high prices. Anyway, WF, which already collects used batteries, adopted corks about a year ago in Napa. Now theyâ€™ll be collected in drop boxes (picture at right)  in all 292 WF stores. Way, to go WF. Cork recycles well–itâ€™s chopped up and used in linoleum. Even better, WF says the corks will ship to recyclers with a minimum of additional shipping, mostly on trucks that are already making other deliveries. But why stop there?

Now I want WF to collect wine capsules. Most are made of tin or aluminum, which are environmental horrors because of their intensive processing and extensive shipping. Human horrors, too: their ores are mined in poor countries by poor people who are treated as badly as miners are in China. And Appalachia, come to think of it.

And now a round of belated applause, please, for Fetzer, which has wonâ€”for the 13th timeâ€”a California Waste Reduction Award. Fetzer says its landfill waste

When they have a crush at Fetzer, itâ€™s not always grapes  that go into the crusher. Often enough itâ€™s bottlesâ€”and cardboard is recycled by the trailertruck-load.

amounted to 1724 tons in 1900 but has since been cut to just under 59 tons through comprehensive recycling of glass, cardboard, paper, plastics, metal, pallets and barrels. And Fetzer annually produces some 2,500 tons of compost and mulch from grape seeds, skins and stems.

Last but not least: Pend d’Oreille Winery, whose owners Julie and Steve Meyer noted that Sandpoint, Idaho has no market for waste glass, so it just goes straight into the landfill. The solution was simple: reusable bottles. Remember those, anyone? They have long since vanishedâ€”at least in the U.S. Brewers Retail (a.k.a. The Beer Store) is a highly regulated government-controlled monopoly in Ontario, Canada, (Canadians sometimes say â€˜Americans have organized crimeâ€”we have the Liquor Control  Boardâ€™); for all its faults itâ€™s a recycling/re-using heavyweight. Deposit beer bottles are refilled on average15 to 20 times (a re-use rate of 95%), and any and all alcohol packaging is accepted for recycling: cardboard, plastic, crown caps and screwcaps–and wine and whiskey bottles, too. The last time I was in Argentina I wandered through some working-class neighborhoods in Mendoza and found five-liter â€˜semijohnsâ€™ heaped at the curbs, waiting to be picked up for re-use (the retail  price was so low the jugs were probably worth more than the wine). Here in Manhattan, almost the only people who redeem deposit bottles are the homeless, mostly because the deposit is so small (a nickel a bottle) that hardly anyone who isnâ€™t desperate canâ€™t be bothered. 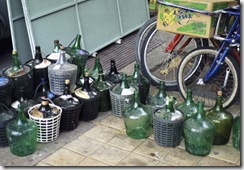 Still, there are reasons beyond laziness for not

Your thrifty Mendozan puts his 5-liter empties at the curb to be picked up by the driver who delivers the next load of full ones. Folkloric note: Plastic netting has ended the reign of raffia wrapping, and many jugs go naked.

re-using bottles here.One is the hundreds, even thousands of bottle styles, colors, sizes and shapes in the market, each of which has to be collected, hauled, sorted, cleaned and stored as an individual SKUâ€”an impossible burden for any re-use facility. Wine producers donâ€™t love re-use either (just one odd bottle can bring a bottling line to a long, expensive standstill) and neither does anyone whoâ€™s spent a bundle developing a brandâ€™s â€˜trade dressâ€™â€”its public identity. Most consumers reject the idea of re-use, if only because they did not, like kids in the 1950s, collect and redeem the two- and five-cent-deposit bottles used and re-used by the likes of Pabst and Rheingold, Moxie and Nehi. And the cleaning? Too risky today. Although the technology is better than it ever was, inevitably there will be a mistake somewhere and the system will fail. Inspector #53 will blink at the wrong moment and the result will be a visit from a customer bearing a bottle with a dead mouse inside and accompanied by a lawyer wearing a smile made of razor blades.

All that makes sense, but Julie Meyer was frustrated nevertheless. Finally she and the  staff dreamt up a two-part plan way to make make re-use work: 1]y provide a real financial incentive and b] let the customers clean the bottles themselves. Womanâ€™s a genius. 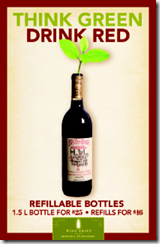 Steve Meyer makes a blended table wine called Sixteen bucks a magnum?  Thatâ€™s the equivalent of less than $11a standard bottle, a bargain many find hard to resist.  Bistro Rouge that he sells for $25 a mag-um. But for any thrifty, green-souled customer who cleans his jug and lugs it back to the winery, he offer top-discount refills.His customers gladly oblige: Each uses only his own jug (eliminating where-has-it-been anxiety, to say nothing of mice) and the saving is no piddly no-account cents-off coupon. Itâ€™s nine bucks. The program began early last year and so far has kept an estimated three and a half tons of bottles out of the landfill and on the sideboard.

OK, itâ€™s a solution thatâ€™s applicable to small wineries only. OK, it sits pretty low on the planet-saving scale. But as my neighbor, the value-oriented winery architect Art Vindepays, puts it, â€˜Even if you canâ€™t do as much as you want, you should at least do as much as you can.â€™