Arrant Snobbery or, The Tale of Unlucky Pierre

This is a little tale of snobs and snobbery. Maybe not so little; certainly not so short, and so I crave your patience. Indulge me and be rewarded, I swear.

Early in the last century Amy Lowell [1874-1925] was a leading figure among the poets known as Imagists [Ezra Pound skanced them as Amygists]. She was a richly flamboyant figure, a cigar-smoking lesbian who at her readings didnâ€™t so much read her poetry as declaim and perform it. She employed sound and lighting effects, theatrical gesticulation, even, now and then, bullying [she once told a baffled audience â€˜Well? Clap or hiss, I donâ€™t care which, but for Christâ€™s sake, do something!â€™]. Lucius Beebe said admiringly that she â€˜expertly handled a full-size, all-Havana smoke,â€˜ and added â€˜reading a volume of Keats while the smoke rolled around her in clouds, Miss Lowell was one of the inspiring sights of her time and place.â€™ 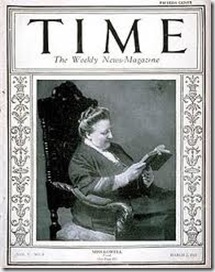 Late honors: In 1925 Lowell was the first poet on the cover of TIME. She died a few weeks later and won the Pulitzer Prize the next year. Her familyâ€™s later poets are Robert and James Russell Lowell. Unfortunately, I couldnâ€™t find an image in which Amy is, as they say, smokinâ€™. FYI, this and other TIME covers are available at timecoverstore.com.

In short, she was a force of nature, and at a reported five-feet-oh and 200 lbs, almost a Rock of Gibraltar, too. She was also a snob. If youâ€™ve heard the wheeze about the Yankee Brahmins of

know you that this Lowell spoke to no Cabots, none. Spoke to none, supped not where they dined, refused invitations they accepted. Once, bound for Europe on the old S.S. Devonian, she chanced to clap eyes on the passenger list before boarding and recoiled en horreur. Immediately ordering her dunnage put ashore she fled as if in fear of her life, explaining to a pierside reporter â€˜There are sixteen Cabots aboard the Devonian this trip, and God isnâ€™t going to miss such an opportunity.â€™ 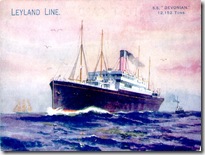 Toff travel, from Boston, anyway, a century ago. The Devonian was but a mere plodder; no ocean greyhound she! Sedately riding the foaming wave at 15 knots, she could get across â€˜the Pondâ€™ in a restful eight days or so.

For that; for enlivening American poetry; for her heroic and entertaining presence Madam Lowell gets a pass on her snobbery. Wine snobs, on the other hand? No way, Gamay.

Wine snobs are a species of vermin; they should be hunted for sport. They are Enemies of Wine whose delight is to damage the innocent pleasure of others; to humiliate the neophyte; to preen themselves on superior knowledge at the expense of those who know less or dare to disagree. They are the chief support of the soft-drinks trade, to whose products they drive customers in millions. They summon to my mind the shade of Ambrose Bierce and his remark â€˜their immunity from a swift and awful death is proof of Godâ€™s love for those that hate him.â€™

Two such creatures, Gerry and John, bodied forth recently during an online discussion ignited by Unlucky Pierre, an importer who had the temerity to ask whether French wines would sell better in the U.S. if producers noted the grape varieties or blends on their front or back labels.

Gerry, a public-relations executive, stuffily said that it wouldnâ€™t be of much help because â€˜Consumers who don’t know which grape is used to make bourgogne rouge probably wouldn’t buy it, anyway.â€™ The logic has a certain leaden brilliance: if you donâ€™t buy it not knowing what itâ€™s made of, you wonâ€™t buy it if you do. Got that? No one who chanced to start with Oregon Pinots and then tried a few from California and then even New Zealand would, upon seeing the words Pinot noir on a French label, decide to give it a try. Truly. Take Gerryâ€™s word for it. Please.

â€˜And,â€™ Gerry added, nose aloft, â€˜those who do know would be disappointed in the producer for playing to the lowest common denominator by naming the varietal on the label. Personally, I would see it as a lack of integrity and selling out.â€™

Heavens to Betsy, Thirsty Reader! It had never occurred to oblivious me that informing consumers would be so foul a deed, such that Camille Pissarro would have included it in his series of Turpitudes Sociales. Under that title Pissarro drew images of â€˜social disgracesâ€™ to instruct his nieces on the horrors of contemporary society. That was in 1889, but the series may still have some relevance today, as the following pictures suggest. 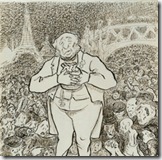 Of the 28 memorable images in the series, surely the most painful is this one, the stark and haunting â€œDe-friended on Facebook.â€


Still, I wonder whether righteous Gerry realizes heâ€™s hoist with his own petard. For example, should one of his Burgundies suddenly appear with the notation â€˜100% Pinot Noir Grapesâ€™ on the label, Gerry has but two courses of action open to him, neither especially attractive: He can stop drinking that wine and be a fool or continue drinking it and be a hypocrite.

The situation is so clear it would be obvious to even such obtuse folks as The New York Timesâ€™s ethics columnistâ€”the old one, who admitted he had absolutely no training in ethics, not even a college course, and was in fact a former gagwriter for TV sitcoms. [As was too often self-evident.]

Next came John, owner of a winery in Washington, who lamented that â€˜wine neophytes in the USA have been so conditioned to think that grape variety(ies) is the most important thing to know about a wine [and most of them are] â€˜entirely unaware of the concept of terroir and its huge influence on a wine.â€™ He added, heart all a-flutter â€˜And let’s not even venture into the perhaps more subtle influences of variety clones.â€™

Despite all, John finally agrees that â€˜the lower or middle tiers of French wine that generally are of more appeal to the un-knowledgeable USA wine consumers would probably sell better if the grape variety(ies) were listed on the label.â€™ Still, desperate for an out, he finally concludes that â€˜there is very little room available for such stuff on labels.â€™

Growing more choleric by the syllable, he rambles on: â€˜Ideally, [grape variety] would be placed so that little or no extra effort would be required to access it,  meaning that the [front] label should have this information. But [this] label is usually the work of paper art dearly paid for by the winery to entice buyers to purchase their liquid art. For my winery, I insist on having a clean, distinctive display label. I place all blending and other information on the [back] label for that reason . . . â€˜ Really? Damned if I know whose labels heâ€™s been looking at, but they canâ€™t possibly include his own.

Ooops!
This is one of Johnâ€™s front labels. The name of a grape variety seems to have crept onto it, in plain sight, but doubtless without his knowing.


John rambles on: â€˜were I pandering to the masses, then concentrating my efforts on the [label] might prove beneficial. But I’m focusing sales on people who know wines and do not place label interest paramountly [sic]. Makers of low-priced wines or wines intended for relatively non-knowledgeable wine drinkers might benefit from significant focus on labels. . . . And how does a serious winery maintain brand identity with labels that in no way look like [its] mainstream offerings? Do you think neophyte consumers are really going to read the bottling statements on labels? Heck, no! And these labels (or the next "big thing" label) are already passÃ©, and people are getting tired of them. Now what? No, I’ll do an intensive job up front on my labels, and then I’ll make them ALL such that there’s no question that they are from my winery.â€™

This one-man shouting match suggests that John has become just a little unhinged, and it obscures Pierreâ€™s simple question, which was: Might French wines sell better with varietal labeling? Got that? Seems like a plain yes-or-no question to me. Brand identity was never in question and multiple label styles were not mooted, Thirsty Reader. â€œBig thingâ€ labels? What the hell is he talking about? In any event, heâ€™s certain â€˜people are getting tired of them,â€™ whatever they may be, and he wonâ€™t put details on his label because he knows people wonâ€™t read them. Smugness to such a degree almost rises to the status of an achievement.

Who benefits from such self-important nonsense? Is it truly pandering, or selling out, or dishonorable to announce what grape or grapes a wine is made of? Are they who ask for such basic information mere masses, presumably unwashed? The lowest common denominator? Would you like to sit down to dinner with Gerry and John?

Should you chance upon them, or they upon you, I earnestly propose that you heed the wisdom of my nextdoor neighbor Hoo-Chee Ma [Yo-Yoâ€™s pole-dancing sister], who got it from Brave Sir Robin:

In sum, snobbery is cheap, easy, vulgar. It is unworthy. It brings to my mind The Baseball Codes, a book of etiquette. These are the unwritten rules of the game and though they be informal and handed-down they are violated at peril. Buy the book by all means, fans, but for now consider the neat summary of it by the ex-major leaguer Bob Brenly: â€œI can break it down into three simple things,â€ he told Jason Turbow and Michael Duca, the authors. Respect your teammates, respect your opponents, respect the game.â€ Wine snobs take note; members of the U.S. Congress, likewise.

And Pissaro? What of him? Well, he is the focus of the exhibition Pissaroâ€™s People at the Clark Art Institute in Williamstown, Mass., through Oct. 2. It isnâ€™t nearly so gloomy as the drawings here suggest.